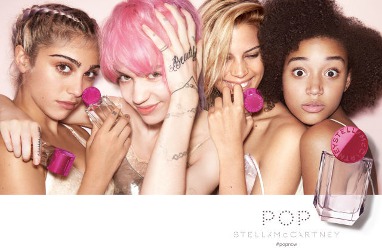 I really wanted to represent young women in beauty in a more modern, contemporary way - to give them something they can identify with and have ownership of.

[...] For me it's about being bold. That's why we called it Pop. It's pink, but it's a powerful pink. It's the kind of fragrance I'd love my daughters to wear when they grow up - I want my daughters to look up to those girls.1

That's Stella McCartney, talking to Vogue about her latest fragrance, Pop. Pop is geared towards millennials, and more specifically, towards young women who might be buying a perfume for the first time.2 The campaign is fronted by Grimes, Lourdes Leon, Amandla Stenberg and Kenya Kinski-Jones. Those aren't the sort of models you'd typically expect to find in a fragrance ad, and the campaign's messages, about things like friendship and sustainability and animal rights and whatnot, are likewise unusual. McCartney said she wanted to give this generation of women “a voice and a fragrance”, and Elle excitedly noted that Stella McCartney's New Scent Breaks All the Major Fragrance Rules.

Any cynical perfumista can already guess that Pop is going to break all the major fragrance rules except those that relate to the juice itself. Pop, the juice, is said to be about tuberose and sandalwood, but in keeping with the brand message about sustainability, no trees or flowers died in its making, and even if you didn't know that in advance, you'd guess as soon as you smelled it. Vogue called Pop a "bubblegum tuberose", but it's not a bubblegum tuberose in the same way that Frédéric Malle's Carnal Flower is a bubblegum tuberose. Pop is indeed young, bright and pink, with none of the richness of real tuberose, and in the modern, shampoo-inspired way, it manages to combine plenty of fruity sweetness with an element of clean — tuberose haters need not fear the indoles in Pop. It's one of those sheer-to-middleweight fragrances that starts off with some sillage, but doesn't really have any depth or fullness to speak of; within an hour or so, it's relatively quiet. Most of the notes (tomato leaves, violet leaves, green mandarin, violet, plumeria, cedar and musks) go by in a fruity pink blur, and the dry down is the usual pale woody musk, lightly vanillic.

Verdict: McCartney may have given the young ladies of the millennial generation a voice, I couldn't say, but the fragrance she has given them is hardly anything new. Pop smells pretty much like the gazillion other cheerful pink fruity floral fragrances already on the market.3 For what it is, it is fine, even fun (I liked it better than some of its competition), and in terms of sophistication, it's arguably a step up from the sweetest of the sweet and the pinkest of the pink. You could argue that it's a poor fit with its advertising, or you could argue that young people today don't see fragrance as a way to express their rebellion anyway? At any rate, don't count on Pop to rock the boat. 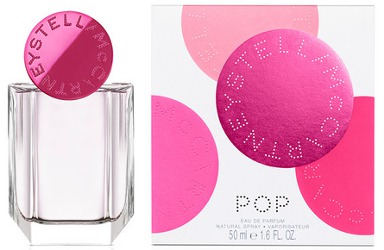 3. From the (very mixed) reviews at Sephora: "Honestly it makes me feel like I'm waiting for my mom to pick me up from the mall." For an opposing (or perhaps not) view, from John Lewis, "The scent is light, summery and quite sweet and my teenage daughter loved it."