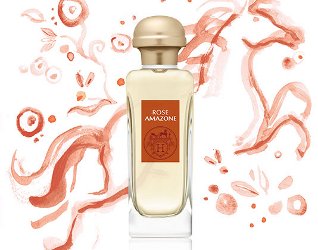 Yes, you're remembering correctly: Robin did write a brief review of Rose Amazone when it was launched in 2014 as a flanker to Hermès 's 1974 classic Amazone. Rose Amazone was developed by Jean-Claude Ellena, Hermès's in-house perfumer at the time, as a modern interpretation of Amazone: "a sparkling, tangy and tender perfume, brightened by citrus fruits, currants and raspberries."

The idea of a young and fruity flanker was already a cliché in 2014, and I somehow never got around to trying Rose Amazone. Three years later, we're swamped in even more new releases and flankers and flankers of flankers every month, and I can't keep up. Maybe that's why I stopped into an Hermès fragrance boutique, hoping to clear my mind, try Galop again and revisit my old favorite 24, Faubourg. While I was there, I caught sight of Rose Amazone and decided to give it a try after all this time. I liked it a lot (more than Robin did, apparently!) and I'd like to purchase a full bottle once I use up my sample vial.

To me, Rose Amazone is an ideal balance of sweet and sour, beginning with a very mouth-puckering grapefruit top note and moving into a tart center of black currant buds and rhubarb. Its sweetness comes from raspberry and a wisp of rose concealed deeper in the heart. The base is a sheer woody chypre, but it's more transparent and yes, more contemporary than Amazone's 1970s mossy-chypre structure.

Rose Amazone probably wouldn't be considered a masterpiece of perfumery: it doesn't have much depth or any surprising harmonies, but it's radiant and natural-smelling, and it makes me smile. For comparison, it feels like a fruitier cousin to Ellena's Rose Ikebana (an earlier creation for Hèrmes) and its currant-and-rose theme echoes the composition of Diptyque's niche classic L'Ombre Dans L'Eau, which I've been wearing for more than a decade. For all these reasons, I'm not surprised that I like Rose Amazone; I just can't figure out how I went so long without giving it a try.