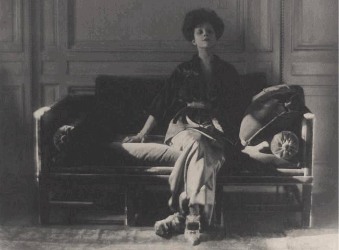 Has there ever been a fragrance that you've just had to smell because of its name? For me, any perfume named La Femme Bohème would have been tempting. The fact that this fragrance is also one of three developed by perfumer Carlos Benaïm for Edward Bess made it irresistible, so off I went to sample it.

Aficionados of luxury cosmetics who happened to be in New York City in 2007 were caught off-guard by Edward Bess's initial appearance at Bergdorf Goodman. He seemed impossibly young as the founder of a cosmetics line, but there he was, debuting his first collection: a range of high-quality lipsticks that looked like "instant classics," performed beautifully, and steered clear of trends. Disclaimer here: I've been a customer at an Edward Bess cosmetics counter on and off for the past decade, so I'm acquainted with Edward in that context.

I actually remember asking Edward about his favorite fragrances back in 2009, and when he mentioned Olivia Giacobetti's IUNX line, I knew he was a serious fragrance-lover. His first perfume, a white floral named Eau La La (2012), didn't make much of an impression on me (gardenia just isn't my thing), but the descriptions for this new trio caught my eye. For the past week I've been wearing La Femme Bohème, an oriental with notes of honey, jasmine and amber and a descriptive narrative about a free-spirited woman who goes wherever the day (or night) takes her. Her story also includes mentions of cigarette smoke, wine and waking up "on a bed of hay." Wild nights, apparently!

I haven't done anything particularly daring or unconventional while wearing La Femme Bohème, but this fragrance does make me feel as though I could wander beyond my daily routine, if adventure called. It's the olfactory equivalent of a well-applied "cat eye" in black liner — a little edgy, a little timeless. It opens with plenty of broom flower, with its facets of grass and almond and tobacco leaf. This must be the "hay" of our heroine's night under the stars. The tobacco theme intensifies in the heart of La Femme Bohème and becomes more incense-y. (Incense is the motif shared by all three scents in this collection — I'll be reviewing Spanish Veil next week, so stay tuned.)

I don't usually wear fragrances with "cigarette smoke" notes —for example, Etat Libre d'Orange Jasmin et Cigarette is too literal for me, and Molinard Habanita is just too intense and musty for me to pull off. La Femme Bohème, however, lures me in with its hay note and its honeyed floral heart, and the smoke is so well-blended into the rest of this composition that I end up loving it. (And I've never even been a smoker!) The jasmine is a touch indolic, but it's mixed so deeply into the honey and incense-y smoke that it doesn't read as a discrete floral note; you don't have to be a jasmine-lover to wear this fragrance.

La Femme Bohème has moderate sillage and excellent persistence, leaving smoky-sweet traces on my skin throughout a long workday. I've been wearing it to the office in small amounts and applying more for evening. It smells particularly good on a scarf or cuffs the day afterwards. If La Femme Bohème were available in a smaller bottle, I probably would have purchased one by now. In the meantime, I'm feeling slightly addicted to my sample. It's not quite my usual fare, but it appeals to my hidden bohemian side.

Edward Bess La Femme Bohème is available in 100 ml Eau de Parfum ($175) at Aedes de Venustas or Neiman Marcus. You can find it in France at Colette.