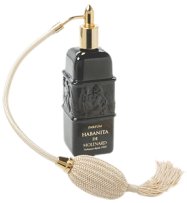 Molinard introduced Habanita in 1921, not as a personal fragrance but as a product to scent cigarettes. It was available in scented sachets to slide into a pack of cigarettes, or in liquid form: "A glass rod dipped in this fragrance and drawn along a lighted cigarette will perfume the smoke with a delicious, lasting aroma" (quoted in The Book of Perfume, page 76).

Whether women experimented with sliding that glass rod along their arms I cannot say, but by 1924 Molinard had launched Habanita as a perfume for women, housed in a Lalique bottle decorated with water nymphs. It was reformulated in the late 1980s, and no doubt has been reworked since then (hasn't everything?); the notes include bergamot, peach, orange blossom, galbanum, oakmoss, jasmine, rose, ylang ylang, heliotrope, patchouli, amber, leather, vetiver, cedar, sandalwood, benzoin and vanilla.

Habanita opens with dry, bitter green and a whisper of jammy fruits (lovers of modern fruity florals will hardly notice the fruits, trust me). It quickly moves into woods (still very dry) and earthy notes, and for a brief time the flowers stand out quite distinctly, each on their own, before the whole devolves into a smoky, powdery, dusky-oriental blend, heavy on the amber and leather, and only lightly sweetened by vanilla. If you can imagine dousing yourself in baby powder, donning an old leather jacket and then smoking a cigar in a closed room with a single rose in a vase 10 feet away, you'll get the general idea.

Susan Irvine's Perfume Guide describes Habanita as the "corrupt, sweet flesh of a sinner", and perhaps it is so (and I'm willing to bet it was more so in its original formulation). Habanita is mischievous, and sexy, certainly, but it has a kind of playfulness about it; it does not strike me as nearly so willfully perverse as say, Robert Piguet Bandit, and it has a kind of youthful air that renders it somewhat less forbidding than Caron's Tabac Blond (another fragrance developed for female smokers).

That is not to say that it smells modern — to my nose, it smells resolutely old-fashioned, and I do mean that in the best possible sense. It carries the romance of the flapper era, captured aptly enough in the scent of cigarettes and leather. That the early 21st century can apparently be summed up neatly by the scent of strawberry-lychee candy is more of a mystery to me, but that appears to be where we are at the moment.

Molinard Habanita is available in Eau de Toilette, Eau de Parfum and Parfum, or in perfume solid (concreta). The Eau de Toilette can be found quite cheaply online, if you shop around, you can find the 100 ml bottle for less than $25. The bottle shown above is from the Molinard 1849 Collection, which features seven of Molinard's best known scents in reproductions of a Lalique-designed bottle, and is sold in 100 ml Eau de Parfum for $295. For buying information, see the listing for Molinard under Perfume Houses. Update: the other scents in the Molinard 1849 Collection are all Eau de Parfum, but Habanita is in Parfum concentration. Thanks to Lilybp for the correction!