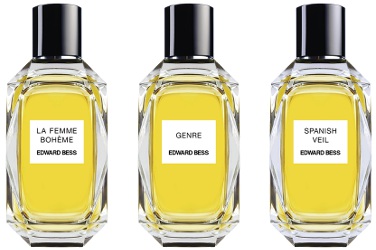 La Femme Bohème ~ "She travels in any direction the wind decides to blow, languid and free without the slightest worry in the world. Unbound by the restrictions of time, she follows her careless whims instead. The sun is already high in the sky when she wakes on a bed of hay, a resting place not unfamiliar after a night drenched in the hazy pleasures of wine. A soupçon of dried sweat mixed with a veil of cigarette smoke lingers on her skin, a scent intensified by the blaze of the afternoon heat. Who knows what today will hold? Life is just meant to be lived and she is La Femme Bohème." An oriental with honey, jasmine and amber.

Genre ~ "A force than cannot be defined, gracefully balanced between Alpha strengths and feminine vulnerabilities. Attempts fail to classify this ambiguous state of seduction simply because there lies no explanation to the phenomenon of this androgynous prowess. Savage and delicate at once, this very fine line plays tricks on the mind. Mysteriously one soul possesses all that is alluring in man and woman, a Genre all its own." An oriental with frankincense, suede and living stallion.

Spanish Veil ~ "A second skin clings to the face, draped ever so carefully to reveal only a glimpse of flesh underneath. Steeped in alluring tradition of centuries ago, the veil's sheer beauty possesses the feminine power to seduce great kings, conquistadors and Matadors unable to resist a single stare veiled in hypnotic mystery. Within this black web of wonderment rays of white light from the Spanish sun trickle in casting a kaleidoscope of intricately woven shadows that censor all signs of age. Scents of the outside world are trapped in the starched net, a magnet for the plumes of smoky incense wafting through ancient basilica walls that mix with the smells of savage animal hides in bullfighter rings and clouds of white dust native to the Latin land." An oriental with tonka bean, sandalwood and guiac wood.