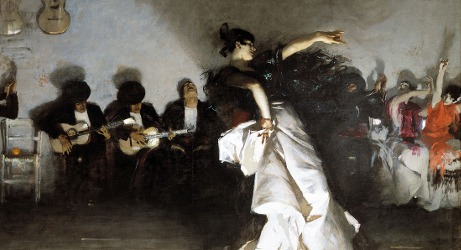 Last week I swooned a bit over La Femme Bohème, one of three new fragrances from high-end cosmetics line Edward Bess; this week I've been wearing Spanish Veil. This is another oriental scent, also developed by perfumer Carlos Benaïm, with notes of sandalwood, tonka bean and guaic wood.

Spanish Veil was inspired by inspired by the artifice and mystery of facial veils worn like a "second skin": "Scents of the outside world are trapped in the starched net, a magnet for the plumes of smoky incense wafting through ancient basilica walls that mix with the smells of savage animal hides in bullfighter rings and clouds of white dust native to the Latin land." But once we get past that somewhat overwrought prose, what do we have?

If you've been holding your breath (maybe just to avoid inhaling all that dust and smoke), you can let out a sigh of relief: Spanish Veil is another seamless and sophisticated composition that's a throwback to classic glamour yet avoids feeling "vintage-y." As Gaia observed on The Non-Blonde, there's a lot more going on here than the three notes mentioned above, but the fragrance is so gracefully balanced that it's difficult to parse. I think I detect some mimosa and iris as surprise floral notes, and there's also an incense motif that unites Spanish Veil with its two "sisters" in the collection. Here, the incense seems like it might be benzoin. The tonka bean is prominent and nutty-sweet, but not dessert-like. The woods are smooth and just a touch creamy, "exotic" yet polished.

Spanish Veil seems to have more sillage than La Femme Bohème, and it's very long-lasting on my skin. I'm trying to think of a comparison I can make with any other fragrance in my collection, and the closest I can come is Amouage Opus III, another radiant golden oriental with a luxurious feel.

As you can tell, I've been impressed by Edward Bess's foray into perfumery. In addition to being high-quality, these fragrances feel like they grew organically from the same creative process: instead of trying to check off as many boxes as possible with three totally different scents (e.g., something fruity, something oud-y, and a big white floral), Bess and Benaïm have produced a trio with a mature and unified aesthetic. That's something increasingly rare these days, so if you've been feeling jaded about niche perfumery lately, you might want to make a mental note of these recent arrivals.

Edward Bess Spanish Veil is available in 100 ml Eau de Parfum ($175) at Aedes de Venustas or Neiman Marcus. You can find it in France at Colette.