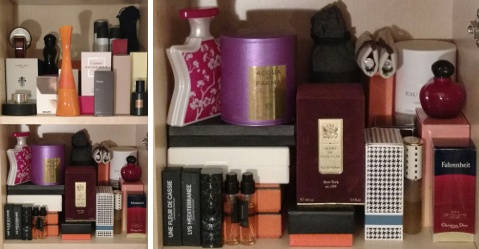 For this episode of Inside the Perfume Cabinet, we get a peek into Now Smell This contributor Erin’s perfume collection and hear about how her interest in fragrance began. Usually, I interview people by phone and summarize it in a post. This time, I give you Erin’s words directly:

As far as early scent memories go, I'm afraid I'll have my perfumista card revoked, but I think my interest in fragrance started in Grade 2 or 3 when I used to walk over from school during the lunch hours with my friend Shoba — who now lives in California and is still my best buddy, three decades later — to a gift store called "Fruit & Stuff", which was focused on "stuff", as we remember it, and specifically, Yankee Candles. I remember sniffing through all the votive scents, such as Bayberry and French Vanilla and Honeydew Melon. I recall my favorites were Pine and a grey one called something like Fireside. Shoba gave me a gift of sandalwood soaps from British chain Marks & Spencer for my birthday around that time, and they were treasures. The first scent I ever purchased by myself was a squat, deep blue glass bottle of Yardley's English Blazer, a fougère, possibly in aftershave concentration, and that turned out to be prophetic. (I still wear a lot of men's colognes today.) My paternal Grandmother was an Avon fanatic, but I was considered the tomboy of the family and so I got a lot of shampoo and sporty body-washes as gifts, while my cousins got the perfumes. My Mom wore big, dramatic orientals, mostly Must de Cartier in the parfum strength, from a dark, tiny bottle in a slim leather slipcase, and later Boucheron, once it was released in the late 80s. I loved smelling those on her, but they seemed impossibly grown-up and somber to me at the time. 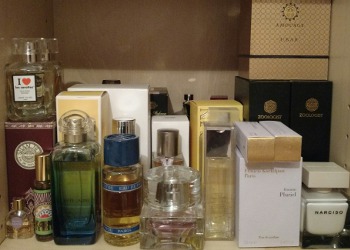 I don't think I wore any regular fragrance as a teen. When I was at university, a corporate metal supplier gave my Dad a gift bottle of Jean Paul Gaultier Classique "for his wife" — my father managed canning plants and Classique was packaged in a can, instead of a box — and, being a bit baffled by it, he gave it to me, after which I wore it sporadically over the next few years, not paying much attention to it. I think that petered out around 2004 or so, after I married my husband and moved out west, which is when I fell down the rabbit hole. My family has always been both amused and desperate to know what happened, how the perfume obsession started, joking I should probably undergo hypnosis to regress back to the exact moment I started maniacally smelling everything. All I remember is reading a magazine article about the perfume industry, and then I took a few fragrance and aromatherapy books out of the library where I worked at the time... and then suddenly, three weeks later, I owned six bottles, including Guerlain Jicky, Thierry Mugler Angel and Gucci Rush. Now, thirteen years later, my collection is at 150 bottles and three plastic tubs full of decants. 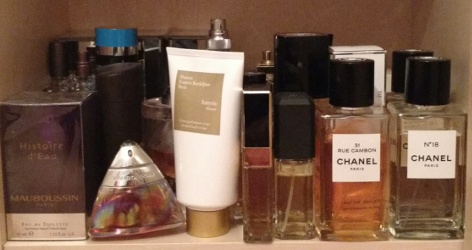 When I first started collecting, I bought fragrances from all the scent families. But over the years, I've sold or swapped many bottles and my mom has adopted a few of my richer, sweeter monsters, like Angel and Tocade. I still really like fougères and citrus colognes, but probably get the most mileage out of my fresh or green florals, chypres and woody orientals. Once, my friend did a "color reading" on my collection and said he picked up lots of white, green and brown, with accents of butter yellow, which I found wacky but accurate. There are few notes I don't like in at least some contexts, but I don't wear very smoky scents like Le Labo Patchouli 24 or Lush The Voice of Reason, because they remind me of bratwurst. From the start, with that plastic red cube of Rush, I've had a strange affinity for scents with a bit of synthetic "noise" over top: S-Perfumes S-ex is another good example. 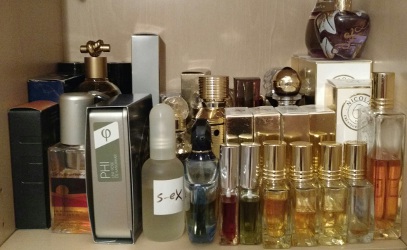 My unicorn scent would probably be J.A.R Golconda. Three is a really brutal number, but if I had to name favorites, I'd say Guerlain Après L'Ondée, Chanel 31 Rue Cambon, Jean Patou Moment Suprême and Parfums de Nicolaï Odalisque. (See, four, I can do.)

I was looking at the (terrible, sorry) photos of my perfume cabinet, which are attached, and realizing I didn't say much about vintage scents. I do have some older stuff, mostly Dior, Hermes and Guerlain, but I've consciously tried to avoid falling in love with too many rare vintages, after a decant of 1960s Coty Emeraude extrait broke my heart. (I've never been able to find a bottle match.) The IKEA cabinet is ugly and utilitarian but it keeps out the light well. And I should modify my trophy bottle answer by saying I'd get some Golconda if I won the lottery, but my unicorn would probably be Le Fruit Défendu by Les Parfums de Rosine, from 1916, which I smelled on a blotter in its Osmothèque re-creation. It was done by Henri Alméras, who, of course, moved on to Jean Patou when Rosine failed, and eventually made my beloved Moment Suprême.