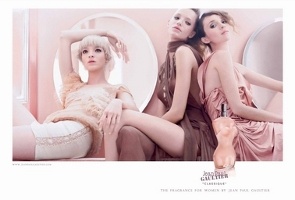 Jean Paul Gaultier, long known as the enfant terrible of French fashion for his irreverent approach to design — "I like to show that there is no frontier between good taste and bad taste", he told The Independent last year — launched his first fragrance in 1993. Originally known as Jean Paul Gaultier, it was later renamed Classique to distinguish it from the scents that followed. Classique was developed by perfumer Jacques Cavallier, and the notes for the musky floriental include bergamot, orange blossom, rose, mandarin, aniseed, carnation, orchid, iris, ylang ylang, ginger, vanilla, wood, amber and musk.

Gaultier was already a household name by the time Classique launched, having gained considerable media attention for the costumes he designed for Madonna's 1990 Blonde Ambition tour (including the "lethal conical bra designed to damage a retina at 10 paces"). It was not to be expected that his debut scent would be dull, and Gaultier's inspirations sounded appropriately zany:

"One part dusty loose powder, like my grandmother wore -- I think it was old Coty; one part that smell you get when you are sitting in the front row of the theater -- for me, I think of going to The Chatelet when I was 12, and the curtain goes up, and the hot lights are on the costumes, wigs and sets, and you breathe it all in. And, just to be modern, one part nail polish remover!"

"But listen, this is not a joke. I set out to create something you really want to wear. Smells are important because they remind you of certain people. If you smell this and you think of me, I want it to be good! And there are flowers, vanilla, a lot of things." (via Women's Wear Daily, 3/12/93)

The packaging was suitably zany to match: the torso-shaped bottle with its metal corset, the tin can in lieu of a cardboard box. Reportedly, a few retailers initially refused to carry the perfume because of the can, but customers (long starved for fun at the fragrance counter) "got it" and the gamble paid off. And it is hard to imagine a bottle more perfectly designed for a long string of limited edition flankers: every year, they re-dress the torso (sometimes more than once) and sell it again.

As for the fragrance, well, as Gaultier himself hinted, it was not quite so zany as the packaging and the ad copy. It has a kind of hyper-feminine, hyper-synthetic feel that is in keeping with Gaultier's design aesthetic, but there is nothing particularly audacious about it and it is perfectly wearable: a sweet, cozy blend of flowers and edible notes (lots of ambery vanilla musk), wrapped in powder. There is a hint of that nail polish remover, but it adds interest to the proceedings (mostly in the top notes) and does nothing to render Classique esoteric or hard to sell.

It is not a style of perfume that I like (even the Eau de Toilette is too powdery-girly-sweet for me), but it is nicely done and I can't help but admire the brilliant marketing. If you do like sweet, also try the Eau de Parfum, which is warmer and heavier than the Eau de Toilette, and the notes have been rearranged enough that it smells markedly different. There used to be a Parfum, but I have never tried it and I am not sure if it is still in production, do comment if you know.