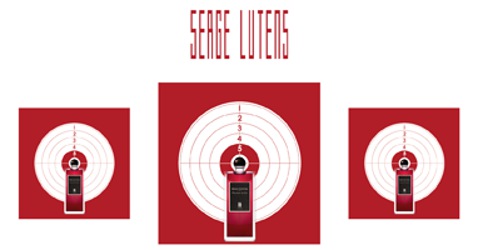 For me these days, smelling a Serge Lutens scent for the first time is a loaded experience. When I first began to explore perfume ardently, the Serge Lutens line yielded some of my favorites — Chergui, Chêne, Douce Amere, Bois de Violette, and more — and others that expanded my appreciation for perfume in general, such as Borneo 1834, Serge Noire and Muscs Koublaï Khan.

Last week I visited the Palais du Shiseido with the intention of smelling Baptême du feu. I felt the now familiar apprehension of someone visiting an old lover. The shop was as calm and exotic as ever, with its dark walls, vaguely Morocco-Deco feel and hushed voices. I glanced up the spiral staircase rising from the middle of the boutique, wondering if “he” were up there.

A friendly saleswoman handed us mouillettes sprayed with Baptême du feu. "My emotions are fluid,” Serge says in his press materials. “Like liquid wax poured into a mould, they determine what seduces me — like this gingerbread heart." Reportedly, Baptême du feu was inspired by the carnivals and funfairs (with their shooting ranges) of Lutens' youth in Northern France. The fragrance’s notes include burnt orange peel, ginger, cinnamon, osmanthus and castoreum.

In brief, Baptême du feu is a sheer gourmand fragrance loaded with baking spice and bright with tingling citrus and stemmy floral top notes. Cinnamon and sweetened ginger hit me first, but it’s more complex than any gingerbread I’ve ever eaten. For one, a green thread runs through it, diluting the fragrance’s bent toward the pastry case. For another, an almost caramelized wood grounds it.

Finally, a hit of “manly cologne” — I’m not sure what else to call it — rises as Baptême du Feu settles. It's not lavender and not fougère, but it's traditionally "manly" all the same. This has the advantage of pulling Baptême du feu out of scented candle territory, but it also moves the fragrance from my own preference zone. Someone who has longed for a scent that bridges a classic Eau de Cologne and a warm gourmand fragrance, though, might find the answer to his or her prayers in this one.

As I sniff Baptême du feu, I can’t help but wish I had some Five o’clock au gingembre to compare it to. Memory tells me that Baptême du feu is fresher, but I welcome the comments of anyone who has tried them side by side.