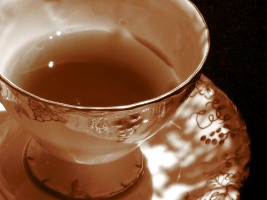 Getting to know civet as a fragrance note can make you gag. Put some costus roots under your nose one fine morn and you may skip breakfast. “Investigating” ginger, doing your ginger homework, is more pleasant: take a crisp ginger root and rub it between your fingers, bruise it with your fingernail, and inhale its lively and clean aroma (bite into the root for added credit); smell and taste yellow powdered ginger; slowly chew a piece of sticky, candied ginger; drink an old fashioned spicy ginger ale; and finally, eat a moist slice of warm gingerbread, straight from the oven, washed down with a ginger infusion, made using boiling water and sliced ginger root (sugar and milk optional). You are now ready to recognize ginger in fragrance. 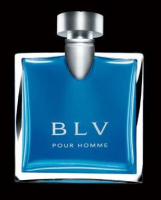 Almost a year ago, a Canadian perfume blogger was kind enough to send me lots of perfume samples – including a Bvlgari Blv mini. I ignored Blv because I’m prejudiced — against blue perfume bottles and blue perfume juice; when I see “blue” associated with fragrance, I think of awful ozone and marine fragrance notes (yes, I’ve written about my blue phobia for years; you may yawn). I was fooled by Blv, or simply a fool, because the fragrance has nothing to do with ‘water’ or ‘fresh air’ — it’s a cologne built around a ginger (galangal) note and also contains tobacco flower, gray teak, cardamom, gingko leaves, juniper berries and sandalwood.

Like Five O’Clock Au Gingembre, Blv provides no dramatic twists and turns, no surprises for the wearer. Blv opens with an indistinct woody-floral accord — the wood is dry and the flowers are sweet. What ginger resides in Blv is smooth and not foody; any freshness Blv’s ginger possesses is overpowered by dusty woods, “flowers” and, especially, aromatic juniper berries and cardamom. Gingko seeds can smell disgusting, and fresh ginko leaves smell cabbage-y to me; if there’s any ginko in Blv it’s well hidden — thank goodness. Overall, Blv is a pleasant-smelling, uncomplicated cologne and its powdery-musky base notes smell clean and soapy — and start to grate on my nerves as the day progresses and those base notes refuse to fade. When smelled alongside Five O’Clock Au Gingembre, Blv smells “adolescent” and inexpensive. Are there any great ginger-centered fragrances? Please comment if you have a recommendation.

Note: first image is Morning Cup of Tea by Heidi Schachtschneider aka dragonflysky at Flickr, some rights reserved.