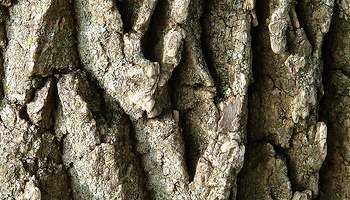 As every serious Serge Lutens fan knows, every year, one fragrance from the "exclusive" collection (i.e., those that aren't exported to the US) is selected as a limited edition addition to the "export" collection (i.e., those that are). These fragrances get packaged in the regular export bottle (i.e., the tall rectangle) instead of the bell jar you get in Paris, and they hang around until they sell out. Last year's pick was Fumerie Turque; this year, we're getting Chêne. I don't know why it is never Iris Silver Mist or Tubéreuse Criminelle, but I keep waiting and hoping.

Chêne was launched in 2004, and described as "the comfort and magnitude of oak" (chêne is the French word for oak). It was developed by perfumer Christopher Sheldrake, and the notes include cedar crystals, wood sap, black thyme, immortelle, beeswax, silver birch, rum absolute and tonka bean. Chêne opens on the rum absolute and sweet green wood sap, lightly honeyed, and for a brief time, smells like something I might very much like to drink on a cold winter night. The rum mostly fades as the woods and spices heat up, and Chêne turns dry and earthy-mossy. There is just the tiniest hint of honey and vanilla to sweeten the woods, which smell like freshly cut wood chips mingling with the scent of long-empty wooden spice boxes from another century. Several commentators have detected a pinch of cumin, and there is, for a brief time, a light undertone of something sweaty.

Of all of the fragrances in the Serge Lutens Les Eaux Boisées collection, Chêne has the sparest, most unadorned character; the woods are the point here, and while it is beautifully done, it perhaps lacks the big "wow" factor of some of the others in the line. I would call it a sleeper scent — the sort of thing you might dismiss on the first or second try, only to become hopelessly smitten on the third.

Anyone could wear Chêne, but as unisex fragrances go, it perhaps tips the scales towards the masculine side. It layers beautifully with Serge Lutens Fleurs de Citronnier, and undoubtedly has possibilities with other florals as well. The lasting power is excellent.

Serge Lutens Chêne is $130 for 50 ml Eau de Parfum. In the US, it has so far appeared only at Barneys (I think?), but it will be at other Serge Lutens retailers eventually. For buying information, see the listing for Serge Lutens under Perfume Houses.