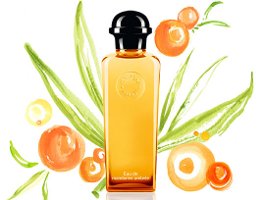 Eau de Mandarine Ambrée is one of two new 2013 offerings in the unisex Cologne Collection at Hermès, the other being Eau de Narcisse Bleu. Both were developed by house perfumer Jean-Claude Ellena, who notes that Mandarine Ambrée "is quite immediate, the other [Narcisse Bleu] is more complex.” The same contrast might be drawn between the last two additions to the series, Eau de Pamplemousse Rose and Eau de Gentiane Blanche,1 and once again, I find that I prefer the immediate: Eau de Mandarine Ambrée is easily my favorite; Eau de Narcisse Bleu, like Gentiane Blanche, is arguably the more interesting of the pair but was just a tad too mild for my tastes.2

Mandarine Ambrée, which features mandarin, passion fruit and amber, has a similar sparkling start as the Pamplemousse Rose, albeit with much less (but surely some) grapefruit. It's bright and cheerful, with a beautifully juicy and tart mandarin note that gradually gets fruitier, fuller and sweeter, and then slightly woody, with a sheer amber base and a slight dash of vanilla. It isn't heavy, and indeed it smells suspiciously like something that is bound to be fleeting, but it isn't — a few good sprays lasted for hours on me, and even the citrus and fruity notes linger far longer than you'd expect.

Again like Pamplemousse Rose, Mandarine Ambrée is a cologne in the classic sense, in contrast to the more modern approach taken with Gentiane Blanche and Narcisse Bleu. Presumably, you know who you are and which you'll be likely to prefer, but I do think both are worth a shot.

Verdict: I knew within 15 minutes that Narcisse Bleu was not for me, but I wasn't immediately sure about Mandarine Ambrée. As sometimes happens, it grew on me with subsequent wearings. I'd add it to my buy list if I needed another summer cologne from Hermès, or if they offered it in a (much) smaller size,3 but as it is I will probably do without it until I drain my bottle of Pamplemousse Rose, and maybe replace my almost-empty bottle of Osmanthe Yunnan. Thinking of Angie's recent post on Day to Night Perfume for Summer, Mandarine Ambrée would make a perfect daytime pair with Hermès L’Ambre des Merveilles for evening, and if my sample holds out, I might try layering it with some others in the Merveilles series — it could be that it would do nicely with Eau Claire.

2. That said, the opening of Narcisse Bleu is really quite stunning, and it's worth trying if only for the unusual take on bitter greenery in the first few minutes, which inspired Victoria at Bois de Jasmin to quote Monty Python's "we want a shrubbery". After that, it's a much milder experience, although the narcissus note is likewise quite nicely done. There's another positive review of Narcisse Bleu at Grain de Musc. If you'd like another take on the Mandarine Ambrée, check out Persolaise.

3. Hermès does frequently produce 15 ml travel sizes, sometimes as limited editions. If I come across one for Mandarine Ambrée, it will be mine.