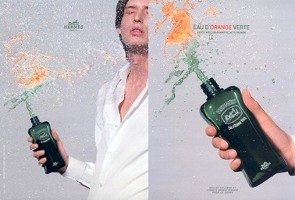 Eau d'Orange Verte is a citrus chypre, along the lines of Ô de Lancôme or Eau de Rochas. It starts with a slap of citrus, very sharp and acidic. The sharpness fades into a very dry orange under a heavy veil of herbal green and what smells to me like petitgrain. There is a whisper of dry florals, and a lovely mossy woods base.

It is currently marketed as a unisex fragrance, but I believe it was originally introduced as a men's. When I first tried it several years ago, I thought it too masculine to wear; since then, I've become a convert. There is something very classy about Eau d'Orange Verte; like Christian Dior's Eau Sauvage or Guerlain's Vetiver, it may smell like you've borrowed it from a man's dresser, but at least you've borrowed something worth the wearing.

It is the perfect summer refresher, and like almost any perfect summer refresher, its one drawback is its relatively poor staying power. A bit of the mossy woods lingers for hours, but the fun part is over in about an hour or so. Hermès ought to make a 15 ml travel spray but they don't; there are, however, individually wrapped pochettes or towelettes in Eau d'Orange Verte, and they are perfect to carry in your purse on a hot summer day for a little pick-me-up

Over the years, Hermès has introduced several variations on Eau d'Orange Verte; the only one still in production so far as I know is Concentré d'Orange Verte, a 2004 launch created by perfumer Jean Guichard. If you must have something longer lasting than the original, it is a good alternative, but as is often the case when you take a light fragrance and try to create a more concentrated version, something gets lost in the translation. In this case, it is the zesty opening: it is considerably more muted, and moves quickly into the woody dry down. The mint seems to have been amped up in compensation, so it is not a dull fragrance, it just isn't quite the same thing. Which you prefer of course depends on your taste; I'm sticking with the original.

5 Perfumes for: a Flanker Skeptic