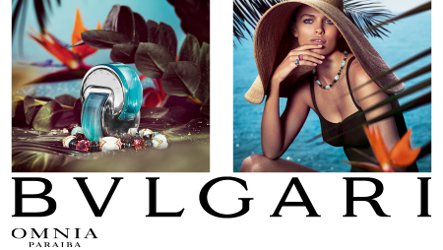 Omnia Paraiba is the sixth flanker to Bvlgari's original Omnia. (I'm trying to think of other fragrances that keep right on generating flankers long after they're discontinued, and nothing comes to mind. Do comment if you can think of one!) I thought about skipping Omnia Paraiba altogether, but since I've reviewed them all so far I feel like I ought to soldier on. A quick run down, so you can see where I stand on the Omnia series and decide just how big a grain of salt to take with this review:

Omnia original (2003): Full bottle worthy. I really should have bought two when I could.

Omnia Crystalline (2005): Pretty darned good. I like Omnia Crystalline. If I was forced to buy a watery scent with pear, this would be my easy first choice. But I don't quite adore it.

Omnia Amethyste (2007): Pleasant, but I don't like it even as much as Omnia Crystalline.

Omnia Coral (2012): A notch above the last two, but still, no cigar. Crystalline is still my favorite Omnia flanker.

So, there we are. I did not have high hopes.

Omnia Paraiba is supposed to be a "luscious floral scent with fruity freshness", and to intertwine "the freshness of bigarade oranges with the exuberant passion flower". That's all about right if you're used to reading pr-copy-speak. It's fresh, it's fruity, it's floral, with the emphasis on the fresh and fruity parts — it's clean, and has a definite sunny / tropical twist, but is too sheer and watery to overwhelm. The citrus in the opening is lively and bright, there's just a dab of peachy-pear-ish jammy fruit: it's persistent, mind you, that is, Omnia Paraiba is fruity through and through, but it keeps things light, and it never gets too sweet. The floral notes, as you'd expect, are pretty much general rather than specific, and the base is pale and clean. The cocoa bean — presumably a nod to the original Omnia?  — is just the teeniest little hum in the base. Nobody will smell Omnia Paraiba and think of chocolate, and for that matter, I might just be imagining that I can smell it at all, because it's in the list of notes. I can't decide. 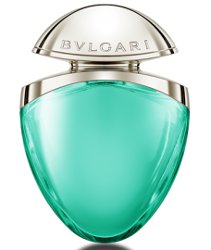 Verdict: A quick try on a blotter was a bit discouraging, but now that I've worn it, I'll have to admit that I like Omnia Paraiba, in fact, I liked it more each time I wore it. That said, I have nearly nothing to offer up in its defense except that boy, this stuff is cheerful! It is not a great scent. It is by no means anywhere near as good as Omnia, and smelling it right now, while writing this, I am simultaneously smiling to myself (it's cheerful!) and acknowledging that it really does smell an awful lot like those peach fruit-leather roll-up things. (Do they still make those? If you don't even know what they are, congratulations, you are not as ancient as I am.) I put Omnia Paraiba in the same category as Eau de Cartier Zeste de Soleil, as a sort of antidote to mild seasonal affective disorder, but I would have to say that even the Cartier is the better scent. Still...did I mention it's cheerful?

Bvlgari Omnia Paraiba was developed by perfumer Alberto Morillas. It features notes of Laraha orange, passion fruit and flower, gardenia, sugar cane, vetiver and cacao bean. It is available in 25 ($50), 40 ($65) and 65 ($82) ml Eau de Toilette and in matching body products.