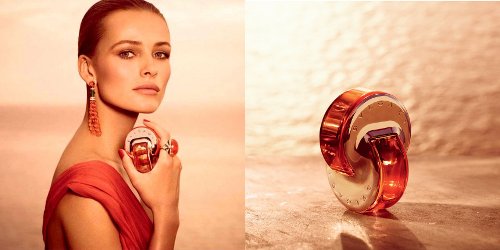 Bvlgari goes right on making flankers to their original Omnia fragrance (2003), and I go right on trying them, even though we're now at flanker #5 and I haven't really liked one since flanker #1 (Omnia Crystalline, 2005). But I'd guess that #2 and #4 (Omnia Amethyste, 2007 and Omnia Coral, 2012) outsell the earlier ones, and Omnia itself is likely no longer in production.1 The latest is Omnia Indian Garnet, and like all the rest of the series, it was developed by perfumer Alberto Morillas. And no, I don't like it either, so feel free to skip the rest and go on about your business.

I will say that Omnia Indian Garnet is a bit nicer than I expected, and like Omnia Coral, it does have more heft and personality than the earlier flankers, which didn't stray far from fresh, clean and light. The opening is bright citrus and vague fruit with a very mild saffron; it warms quickly but never really works up to the exotic sort of thing you might imagine from the notes (mandarin, orange, saffron, osmanthus, tuberose and amber) or the name (the 'Indian' part would not appear to reference anything but the gemstone). The floral heart is likewise warm, and it's reasonably deep, but still, blander than you'd expect — maybe there's osmanthus and tuberose, who knows, but I wouldn't have recognized either. It just smells like department store perfume flowers. The dry down is a woody musk, again, warm-ish, with a hint of soft spice, but it's neither warm nor spicy enough to move Omnia Indian Garnet into the oriental family.

Verdict: Meh. It's pleasant enough, and I didn't mind wearing it at all, but still, meh. If you're after a warm orange-y thing for spring / summer, Omnia Indian Garnet is certainly worth a try, but it just isn't as lively as it ought to be, and you could surely do better if you set your mind (and your nose) to it. It smells like Alberto Morillas wasn't given much of a budget to work with, and like he was told to keep it tame: what Omnia Indian Garnet could really use is a dose of the masala spices from Omnia.

Do comment if you can think of a lovely warm orange-y thing for spring / summer! And of course, if you've tried Omnia Indian Garnet and you loved it, do speak up. 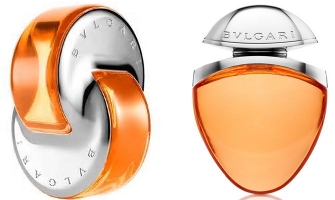 1. As I mentioned when I reviewed Omnia Coral, the original Omnia was not included in Bvlgari's "Charm collection" when the travel sprays were first introduced in 2011, and Omnia has not appeared on the Bvlgari website at all for a couple of years at least. Omnia Green Jade (2008) is no longer there either, although it was originally in the Charm collection. At the moment, you can still find both fragrances online, but they're not as widely available as they once were.