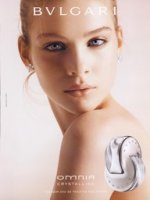 Bvlgari introduced the original Omnia fragrance in 2003. Omnia is a spicy oriental by perfumer Alberto Morillas, and marries spices with trendy gourmand notes like tea, chocolate and almond while managing to be neither heavy nor overly foody. It smells like a nicely spiced wood scent, very sheer, very modern. It is one of my favorites from Bvlgari, and makes a great, nearly year-round woody comfort fragrance.

Omnia got its first flanker in 2005, with Omnia Crystalline. Like many recent flanker scents — Calvin Klein Euphoria Blossom, Prada Tendre, among others — it was designed for the Asian market, where lighter, fresher fragrances are the thing. And it did very well, apparently "reaching number one in Japan and South Korea". (via cosmeticsint.co.uk, 2/9/2007)

Omnia Crystalline is also by Alberto Morillas, and is a fresh musky woody fragrance with notes of bamboo, nashi pear, lotus flower, and balsa wood. On first smell, it would seem to have little in common with its parent scent: it is notably more aquatic, paler (in keeping with its name) and blander, and the first time I tried it, I dismissed it as not interesting enough to bother with.

Subsequent tries have changed my mind. Omnia Crystalline is fresh and light, as you'd expect, and it is blander than the original, but it isn't without personality. The pear, happily, is subdued in the opening, and not at all sweet: it doesn't smell like a fruity floral or like something geared towards teenagers. Once the fruitiness fades, Omnia Crystalline is mostly musky woods, with very subtle green notes and something that smells rather like white tea. And while its overall character remains fresh and clean and crisp, the wood notes smell darker and deeper than you'd expect from balsa wood alone; according to PerfumeWorld, both Omnia and Omnia Crystalline also have guaiac wood, which might explain why I like both scents.

I don't wholeheartedly adore Omnia Crystalline (and I'd still rather wear the original) but it is nicely done and worth trying if you're looking for a clean woody musk for summer. I find it unisex and would think a man could easily wear it so long as he didn't mind wearing a scent called Omnia Crystalline. For that matter, I didn't find the original Omnia very feminine either.

Bvlgari Omnia Crystalline is an Eau de Toilette. I find the lasting power to be excellent (easily 6 hours or more), but I should note that as with the original Omnia, I've seen numerous reports about its poor staying power, and I suspect that the musk notes induce olfactory fatigue rather quickly in some people. It can be found in 25, 40 and 65 ml. Bargain shoppers can find Omnia Crystalline at discount; scentiments currently has the 25 ml for $22.99.