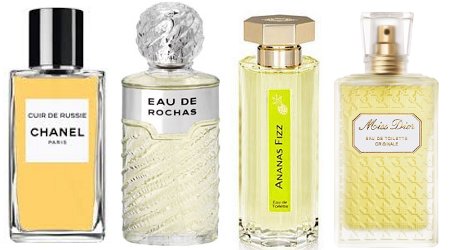 This month marks nine years — !! — that I’ve been reviewing fragrance for Now Smell This. At, say, 50 reviews a year, that’s a whopping 400 fragrances I’ve written about. After all those perfumes and reviews, I thought it was time to talk about the fragrances that have stuck around in my perfume cabinet, those whose decants I drain and bottles I turn to again and again.

Chanel Cuir de Russie: At least three times a week, I wear Cuir de Russie. I started with a 10 ml decant, and when it was finished I thought I’d be fine relying on one of my many other leather scents. Not. Cuir de Russie stands alone. I ended up selling some of my other bottles to bag my own bottle. Even though Cuir de Russie isn’t freaky, I always feel like the most interesting person in the room when I wear it.

Parfums DelRae Mythique: I consider Mythique to be Cuir de Russie's hipper alter ego. She's less worldly than Cuir de Russie, but she knows how to take a joke. This is one of the few fragrances for which I keep a back-up bottle.

Chloé L'Eau de Chloé: L'Eau de Chloé is my answer when it’s hot out; I want to smell a touch retro but fresh; I don’t know who I’ll be with; or I just can’t decide and I may want to layer something floral over it later. L'Eau de Chloé is as close to all-purpose as I have in my perfume cabinet.

Rochas Eau de Rochas: This is another fabulous choice when it’s hot, but unlike L'Eau de Chloé, I wear it when I want more character. It’s a little more “cologne-y”, and its faint, lingering patchouli is wonderful. Next time, I'm buying the jug.

Christian Dior Miss Dior: It took me a while to grow into Miss Dior (I’m referring to the original or “Classic,” of course), but when I did I needed to wear it at least once a week. I crave it. I don’t know if it blends with my character or makes much of an impression on anyone around me, but I don’t care. Miss Dior's jolie laide allure keeps me engaged.

L’Artisan Parfumeur Ananas Fizz: How did this happen? I rarely think of Ananas Fizz, yet I must reach for it often, because the bottle is getting perilously low. Ananas Fizz — thank goodness it’s back in production! — is so easy to wear, yet still so interesting. I love its crisp wackiness and cool vetiver. It's a great perfume for going out in the evening.

Annick Goutal Duel: Duel is my all-purpose autumn scent. It’s warm and intriguing yet somehow still remains fresh as water. If a couple could only afford one bottle of perfume between them, this is the one I’d recommend.

Looking over this list, I see that I come off as an octogenarian with a fat pocketbook, Gucci sunglasses and a matinee-length string of pearls. My most-used perfumes are grounded in the classics. (In reality, I drive a pickup truck and stock my living room and closet with thrift store loot. However, thanks to my friend Jacob’s grandma, R.I.P., I do have a pair of fabulous 1960s Gucci sunglasses.)

What surprises me most is that certain perfumes I adore — perfumes I consider definite old favorites — I don’t end up wearing much. Those include Ormonde Jayne Woman, Caron Tabac Blond, Rochas Femme and L’Artisan Parfumeur Dzing!. Go figure.