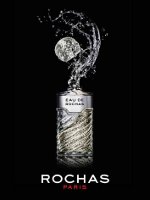 The concept of cologne is so alluring. A true cologne should be sparkling and clean and disappear soon after it is applied — almost like an extension of the soap you just used in the shower. It all sounds so fresh, pure, and energetic. The problem for me is that a cologne never really feels like "me". Just like meditation, camping, and taking up a sport, cologne sounds like something I want to love but, to be honest, really don't. That is, until I met Eau de Rochas.

Most colognes are easily identifiable by the "eau" that precedes the name. Many perfume houses do a cologne as a matter of course. Some famous colognes are Eau de Guerlain, L'Eau de L'Artisan, Christian Dior Eau Fraîche, Thierry Mugler Cologne, Eau de Cartier, and, of course, 4711. I like the cedar freshness and gin and tonic quality of Eau de Cartier, and I spray Thierry Mugler Cologne on my sheets when I change the bed, but otherwise cologne has never resonated much with me. Frugal shopper that I am, though, when I saw a bottle of Eau de Rochas at a thrift shop for four dollars, I had to buy it.

Eau de Rochas was released in 1970 and marketed to women, although if it were released today I think it would be positioned as unisex. According to Osmoz, Eau de Rochas was originally called "Eau de Roche", and there's something about the dirty, mineral aspects of a rock that describe Eau de Rochas well. Osmoz goes on to list Eau de Rochas's topnotes as verbena, lime, mandarin, and bergamot; its heart as wild rose, jasmine, coriander, and carnation; and its base as oakmoss, amber, and musk. To me, Eau de Rochas smells like lime and bergamot all the way through, though gently, and like a quietly dirty patchouli as it settles next to my skin. I don't smell any of the floral or spicy heart of the fragrance, except as a gentling influence on the citrus. It walks the balance between fresh and luxurious, like a cabin in the woods within walking distance of a four-star restaurant.

What I think Eau de Rochas has that so many colognes lack is a warm landing. Instead of the through and through fresh — almost brutally fresh — feel of so many colognes, Eau de Rochas recognizes that after splashing it on you might want to settle on the porch in summer with a book or work in the garden rather than speed to the tennis court. Eau de Rochas feels like a good cologne for a languorous redhead looking to score a nap on a July afternoon or a man who listens, tamarind whiskey sour in hand, to Caetano Veloso with the windows open and the sounds of the city in summer beeping and humming below.

Eau de Rochas was developed by perfumer Nicholas Mamounas. It isn't easy to find in department stores, but is readily available at a discount online.