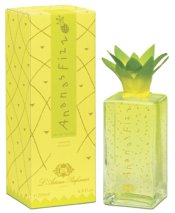 I should start by saying that as a rule, I am very fond of the summer L'Artisans. First, the bottles usually score high on the cute factor (I do like the regular L'Artisan bottles, but I have plenty of them and it is nice to see something new). Second, they are often light and citrusy, which is right up my alley, especially in the summer. Third, they are cheaper (per ounce, anyway) than the regular line.

Ananas Fizz starts with sparkling citrus; there is a touch of pineapple, but it is subdued, and tempered by a dry woody undertone. It does smell like a fizzy tropical drink, but it is only slightly sweet — it is nicer and more sophisticated than the Kool-Aid punch with rum that I initially feared it might be.

As it dries down, it gets softer, and takes on a bit of watery coconut milk and vanilla. The cedar becomes rather pronounced, and right before it fades away there is a hint of vetiver. A tiny bit of pineapple remains right through to the end, but it is a light scent, and the lasting power is average at best for an Eau de Toilette.

I love Ananas Fizz, but I know many people who detest it — mulch pile was one of the epithets thrown around on the fragrance boards. So I would have characterized it as a love-it-or-hate-it scent, but since L'Artisan added it to the regular line-up this year, I can only assume it has sold very well. The bottle shown above, by the way, was the limited edition bottle. It ran $110 for 200 ml. You can still buy it in that bottle if you shop around, but otherwise it will be in the standard L'Artisan bottle, and for the same price you will get only 100 ml and no pineapple top.

This year L'Artisan released a matching body cream, Creme d'Ananas, and as it happens I got a chance to try it out yesterday (thanks V!). The consistency is just wonderful; the scent is very soft, with less of the fizz and wood and a bit more of the fruit. It layers beautifully with the Eau de Toilette and it does seem to help extend the lasting power. Update: see Anjali's review of Creme d'Ananas.