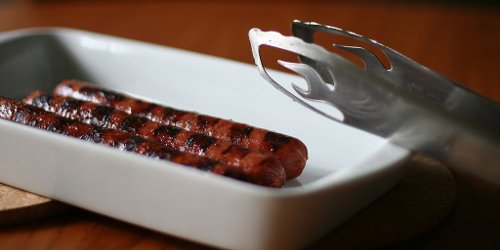 Way back in 2008, Erin wrote a post called 5 Perfumes for: Gourmand Deniers. Her selection emphasized gourmands for people who are wary of gourmands; in her words, gourmands "that camouflage their intentions". Like Erin, I don't think of myself as a huge fan of sweet, dessert-based gourmands, although as time goes on I find more and more exceptions to the rule. Today, however, I'm thinking about an entirely different kind of gourmand. Here are five fragrances that smell like food without calling to mind the conventional offerings on a dessert tray.

Lush The Voice of Reason: If Dinner by Bobo were still on the market (and if it is, do comment), it would surely take top honors in any list of gourmand oddities, but as a reasonably meaty substitute I offer The Voice of Reason, which I described in my review as "rather alarmingly meaty" — the opening smells, basically, like sausages in barbecue sauce. Admittedly, it dries down to something much closer to a conventional gourmand, but fans of wacky top notes should give it a try.

Hermès Vetiver Tonka: If there's another vetiver as edible as Vetiver Tonka, offhand I can't think of what it is (again, do comment). Plenty of toasted sugar and hazelnuts, but also plenty of vetiver, so that it smells foody, but not like dessert (although more than once, I've thought that it ought to be a cocktail). I used to wear it more often than I do now, but whenever I put it on, I'm brought up short by how entirely perfect it is.

L'Artisan Parfumeur Bois Farine: I did not set out to put two Jean-Claude Ellena fragrances on the list (he also did Vetiver Tonka), but that's how it worked out. Bois Farine is named for a flower that reportedly smells like flour, and Bois Farine does have a doughy undertone. Peanut butter mixed with hamster-cage shavings, though, is the more usual description. It spent a good long time in my purgatory basket before I fell for its charms.

Serge Lutens Miel de Bois: Yes, it does smell like honey, but you'd be hard-pressed to make honey smell less like dessert than it does here. I once bought a really strong buckwheat honey. It was nearly opaque black, like blackstrap molasses, and it turned out to be just short of inedible. I tried mixing it with a lighter honey, or just using less, but in the end, I just threw it out. That honey tasted like Miel de Bois smells. I don't know why I love it, but I do.

Demeter Beetroot: Simply put, the best root vegetable fragrance I know. Do you want to smell like root vegetables? You'll never know until you try.

Note: top image is sausage [cropped] by Waytru at flickr; some rights reserved.