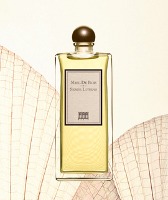 After yesterday's discussion of Cèdre, I thought I would revisit Miel de Bois, yet another Serge Lutens fragrance that I initially disliked but slowly came to appreciate. It was released earlier this year; the nose, as always, was Christopher Sheldrake, and the fragrance notes are ebony, gaiac and oak wood, aquilaria aguillocha, honey, beeswax, iris and hawthorn.

Miel de Bois is an unusual fragrance, and to be honest, I recoiled in dismay the first time I smelled it. It starts with heavy, very dry woods overlaid with raw honey. If that sounds lovely, well, think again: it is an extraordinarily harsh, almost caustic smell, and the hawthorn note that soon begins to weave through the composition increases the dissonance, at least in the short run.

After 20 minutes or so it calms into something much milder, almost a skin scent, really. It is still heavy, dry woods, but without the abrasiveness, and the hawthorn and iris smooth out the jagged edges and leave a velvety finish. The honey is quite strong, but the sweetness is tempered by the wood, so that there is nothing candied or syrupy about it. There is a little hum of smoky incense, hardly noticeable, and a hint of beeswax.

It isn't conventionally pretty, exactly, and I wouldn't call it feminine either, but it is extremely compelling. One of the things I so admire about the Serge Lutens line is that he doesn't create a unisex fragrance in the usual manner, by amping up the fresh citrus notes and toning down the florals, but rather by creating a scent that is completely outside of any preconceived notion of what fragrance ought to smell like on anyone, male or female. Miel de Bois is not the first Serge Lutens that surprised me, and surprise is rare enough in fragrance that it makes second, even third and fourth tries worth the effort.

Miel de Bois is in the Serge Lutens export range; for buying information, see the listing for Serge Lutens under Perfume Houses.

Update: in 2010, Miel de Bois was moved into the exclusive range.