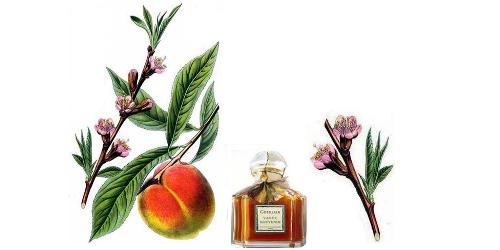 My love of fragrance did not begin by smelling the contents of fancy bottles. I learned to love perfume in the garden. If you've read my reviews for any length of time, you may have noticed I often use botanical illustrations to "decorate" my posts; that's because any perfume that gives me a realistic representation of a beloved natural scent has captured my attention and has a chance at capturing my heart, too.

I grew up in the countryside, and big parts of my childhood were spent outdoors: in flower beds, vegetable gardens, orchards, woods. The bounty of those places found their way into the kitchen, where another facet of my scent education took place (all those fruits, vegetables, spices, vanilla, chocolate, liquor!) To list my favorite fragrance notes would be a laughable exercise; I've been smelling everything that crossed my path my entire life...the list would be extensive. Still, the scent of stone fruits would be high on my list; I love the aromas of ripe apricots, plums and, especially, peaches.

I can't believe my luck: Guerlain Vague Souvenir (released in 1912) has found its way to me twice. When I first started writing for Now Smell This (almost eight years ago!), an anonymous reader who never gave me his-her name, sent me a batch of long-discontinued perfumes — most of which I had never heard of before. In that shipment: Vague Souvenir. Recently, when I bought a vintage fragrance online, a tiny bottle of Vague Souvenir Extrait was included (gratis) in the package; the bottle had a brittle/flaking label and its tassel turned to dust when I touched it.

It's too bad Guerlain does not maintain an online database, full of gorgeous images, documenting all its creations. I've found little information on Vague Souvenir. What seem the most reliable sources list two fragrance notes all the time: plum and peach; other than those notes, jasmine and gardenia are sometimes mentioned. One of my favorite peach-scented perfumes is Guerlain Mitsouko. I was anxious to see how Guerlain presented peach in Vague Souvenir...seven years before iconic Mitsouko made its debut.

Vague Souvenir goes on smelling of pollen-rich, winter-blooming camellias mixing with tart, "bright orange" peach. This mix of fruit and petals is creamy, but also "cool," as if a drop of menthol had been mixed in. To my nose, Vague Souvenir certainly contains moss, and the moss smells "rough/wild"...not cozy. As the perfume dries down, peach becomes more prominent and lasts until the fade-out, when it's joined by a smooth, lightweight candied amber note. Vague Souvenir reminds me of a chilly, early-summer day in a garden full of fresh flowers and vegetation; it's a "dreamy" perfume (the "misty memory" of its name is apt...or am I just too damned susceptible to romantic "titles?")

Vague Souvenir was not a commercial hit (even though it survived into the 1950s); its jarring bits (almost-abrasive pollen, a menthol-y moment, peach aldehydes) may have prevented widespread adoration. Vague Souvenir brings to mind a strange perfume-gene-splicing of L'Heure Bleue and Mitsouko...but lighter/brighter than either. Both my Vague Souvenir samples are incredibly fresh for their age; they are both at least 55 years old. I wish you all could smell this lovely perfume "memory."