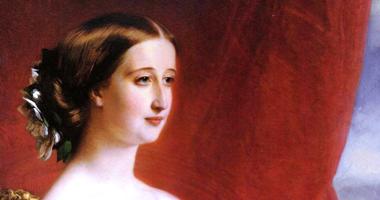 Celebrity fragrances have been around a long time. Like TV, music and movie stars of today, European royalty lent their names and seals of approval to many perfume house scents in the 19th century — and were supplied with all manner of toiletries in return. Having a queen, emperor, princess or other “noble” person or family associated with a fragrance helped sales, and Guerlain received royal “warrants” from the likes of the Queen of Belgium in 1842 and the Prince of Wales.1 Guerlain produced many perfumes with “royal airs” — Bouquet de Duchesse, Délice du Prince, Le Bouquet de Fürstenberg, Esterházy Mixtyre, Bouquet du Roi d’Angleterre, Bouquet du Jardin du roi, Bouquet de l’Impératrice and Bouquet Napoléon.2

Pierre-François-Pascal Guerlain (who founded the Guerlain perfumery in 1828) was awarded a royal supplier patent in 1853 when he received permission from Empress Eugénie (wife of Napoléon III) to name one of his creations Eau de Cologne Impériale;3 Guerlain was given the title Perfumer to her Majesty the Empress Eugénie.2 Eugénie’s cologne became famous, and its “bee design” bottles are an enduring symbol of Guerlain.4 (The bee bottle’s shape was inspired by the top of the Napoleon I column in the Place Vendôme in Paris).1 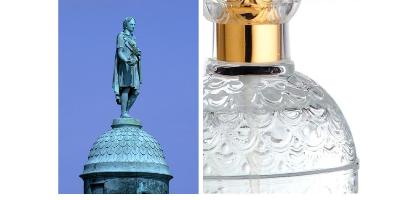 When I read complaints about Eau de Cologne Impériale’s quick disappearance on skin or its “boring” formula, I think: if you want a quirky, powerhouse perfume, you don’t reach for Eaux de Cologne. Impériale doesn’t aim for complexity, it’s not designed to last — it’s meant to refresh the body and revive the spirits...and then fade away.

Eau de Cologne Impériale is all about citrus: outrageously strong bergamot, sour lemons, a lime rind/flower “moment” and menthol-y orange peels. The fragrance right out of the bottle is, to me, intoxicating. After the initial detonation of citrus notes subsides, there is a glint of “green” petitgrain and an “after-smell” of soft neroli. I do believe Eau de Cologne Impériale lasts longer today than it did in the past; I remember pouring it on in days gone by and not being able to smell it 15 minutes later. Eau de Cologne Impériale, from my brand-new bottle, lasts over an hour on my skin…a big improvement, achieved without any lessening of the beauty in Eau de Cologne Impériale’s vibrant opening minutes.

Eaux de Cologne are the workhorses of perfumery. Headache? Put a cool, damp cloth scented with Eau de Cologne over your forehead and eyes and rest awhile. A spray bottle of Eau de Cologne is wonderful to take on trips. As your plane becomes odiferous from the bodily “emanations” of fellow travelers and from the smells of stale food and coffee…spray some Eau de Cologne on your neck, your pillow and blanket, and feel “cleaner” immediately (without fear of overwhelming perfume-haters in the cabin). Place Eau de Cologne-scented handkerchiefs in your luggage (Eau de Cologne Impériale’s bergamot, lemon-lime, and orange rind aromas last for days when sprayed on fabric). I spray Eau de Cologne around my hotel rooms: on the sheets and towels and shower curtain, into the air. Eaux de Cologne are meant to be used lavishly and they provide lots of enjoyment. Evanescent Eaux de Cologne won’t interfere with your “regular” fragrances either; they usually layer well with other (stronger) scents. 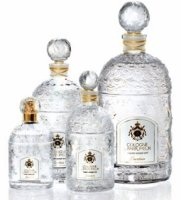 I’m a fan of all Guerlain Les Eaux (Impériale is my favorite...so far, I've not yet tried Cologne du Parfumeur); most have the same lasting power as Eau de Cologne Impériale, with the exception of Eau de Guerlain, which feels more like a light Eau de Toilette than an Eau de Cologne. Eau de Cologne Impériale comes in many sizes and bottle styles and, along with the other Les Eaux, has a newly designed, beautiful white-and-gold label that includes its creator’s name. For buying information, see the listing for Guerlain under Perfume Houses.

I’m not a “royalist,” and Empress Eugénie certainly didn’t have a part in creating Impériale, but if her initial endorsement of Impériale gave it the ‘legs’ it needed to last into the 21st century, I’m grateful to her. Will even ONE of today’s celebrity scents be around in 157 years?

Note: top image of Empress Eugénie by Franz Xaver Winterhalter (1854), middle image of the top of Colonne Vendôme and bottom image of Childeric’s “bees” [all cropped] via Wikimedia Commons.

3. The Book of Perfume, by Elizabeth Barillé and Catherine Laroze, p. 74. 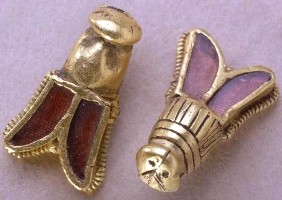 4. Bees were a symbol of Napoleon I’s reign. Bees represented immortality and resurrection, and the bee, as a symbol, linked the new, Napoleonic dynasty to the ancient Merovingian rulers of (what became) France. In 1653, golden “bees” (see image above) were found in Tournai in the tomb of Merovingian King Childeric I (many historians now believe these “bees” are, in fact, depictions of cicadas). Source: Napoleon.org