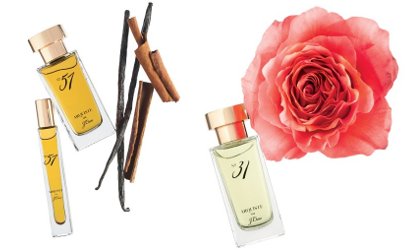 I am not a J. Crew customer. Well, I used to be, back in the early 90s when the J. Crew catalogue still catered to college students and I was still wearing baggy sweaters and oversized men's t-shirts, but nowadays I find most of the brand's offerings too high-priced for my wallet and too trend-driven for my taste. It took perfume to get me through the door of a J. Crew boutique last week — specifically, J. Crew's collaboration with the niche brand Arquiste.

For this project, Arquiste recruited perfumers Rodrigo Flores-Roux and Yann Vasnier to "conjure up the Jan. 5, 1943, opening of 'Exhibition by 31 Women,' the first all-female modern art show in the U.S., curated by Peggy Guggenheim and displayed at her Art of This Century Gallery on East 57th Street in New York." The two fragrances are No. 31, named for the number of artists in the show, and No. 57, named for the street where Art of This Century was located. Naturally, I couldn't resist a back-story like that. To my relief, the fragrances turned out to be well-crafted, affordable, and very pleasing on my skin. (They're more satisfying, to me, than much of the actual clothing in the store.)

No. 31 (my personal favorite of the two) is a sophisticated fruity-floral with notes of red vermouth, eau de vie accord, Bulgarian rose, damson plum, patchouli and oakmoss, "inspired by the bold perfumes worn by the artists. . . the essence and excitement of the avant-garde crowd." The roster for a "31 Women" was a formidable list, including Frida Kahlo, Dorothea Tanning, Louise Nevelson and Gypsy Rose Lee (yes, the burlesque entertainer!), not to mention Peggy Guggenheim herself. It must have been a smart and eccentrically stylish gathering. Would the artists and their friends have been wearing spicy oriental perfumes and aldehydic florals, recent releases from Lanvin or Patou or Lucien LeLong? I like to imagine that someone must dabbed on Shocking or Snuff, since the designer Elsa Schiaparelli collaborated frequently with Surrealist artists, and many of the women featured in "31 Artists" were also Surrealists.

You won't actually mistake J. Crew + Arquiste's No. 31 for a vintage fragrance, but I can see how it might allude to mid-century feminine perfumes. It opens with plum and some other ripe fruit notes that smell like currant and even a hint of blackberry, with a slight aldehydic kick. The fruits merge into a wine-y rose with the slightest hint of a "dirty" edge, and the fragrance's base is a soft chypre base of present-day patchouli and oakmoss (i.e., cleaned-up and a touch sweet). No. 31 has noticeable (but not excessive) sillage and good longevity for an Eau de Toilette, although the dry down is somewhat muted.

After reading the list of notes, I was secretly hoping for No. 31 to feel like an updated interpretation of Rochas Femme (released in 1944, a year after "31 Women"), but it reminded me more of some recent takes on the plum-rose-chypre theme, like Les Parfums de Rosine Secrets de Rose or By Kilian Liaisons Dangereuses. Still, I like it very much, and I can see myself wearing it often once cooler temperatures arrive and I'm in the mood for a nicely balanced fruity-woody rose.

No. 57, meanwhile, is inspired by the physical environment of Art of This Century, which was designed by the architect Frederick Kiesler. For one of the gallery's four rooms, Kiesler created a Surrealism-influenced space that looked like no other in the American art world: it had concave, wood-paneled walls and curvy multi-purpose furniture, and the paintings were mounted on the walls on projecting rods, so that they appeared to be floating in space.1 In a tribute to this wood-paneled space and the cocktails that could have been served there for festive events, No. 57 includes notes of aged whiskey, cinnamon bark, labdanum and vanilla.

This scent is more gender-neutral than No. 31, and it could easily appeal to male as well as female J. Crew shoppers. It has a distinctly boozy note, close to real whiskey, that starts off intense and gradually mellows. This "cocktail" accord is lightened by a grassy note that reminds me of hay or broom. The cinnamon is warm and smooth (no red candies here!) and the woody notes suggest oak and perhaps some cedar, with something sandalwood-like hovering in the background. The vanilla in the base is smoky-sweet and makes me think of fragrances like L'Artisan Parfumeur Vanille Absolument (formerly Havana Vanille). Kevin recently noted that Arquiste's own The Architect's Club featured more vanilla than he expected; I don't find the vanilla in No. 57 to be dominant, although it's there in the mix.

No. 57 and No. 31 both wind down more quietly than they began; that's how parties can be, of course — even avant-garde art openings. Both fragrances are well-made and wearable without being boring, and they're well-timed as autumn releases. You can't beat the price, either, especially for the roll-on travel size. (I bought one of each.) My only concern is J. Crew's pattern of "discovering" smaller brands and then quietly shuffling them off to the "sale" table in a season or two. I hope Nos. 31 and 57 will find their audience and stay around for a long time.

For more information about this collaboration between J. Crew and Arquiste, visit here. You can listen to a short radio piece about Guggenheim and Art of  This Century at the WNYC website.