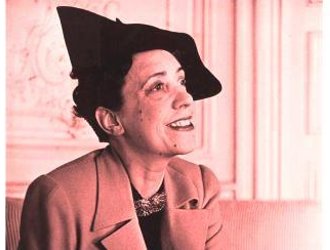 I had seen Elsa Schiaparelli’s work in museums, knew her face from perusing old photographs of the Paris art scene pre-World War II, and had sniffed some of her perfumes, including the most famous, Shocking, before reading Judith Thurman’s great 2003 New Yorker article, "Mother of Invention,"1 but that article sent me on a more in-depth trip of discovery into the world of Schiaparelli.

Two Thurman quotes grabbed me: “Between 1927 and 1940, she [Schiaparelli] generated a meteor shower of ideas that revolutionized the way women dress.”2 Schiaparelli “probably did more to enrich the language of 20th century dress than any of her peers.” After researching that enriching meteor shower, an apt categorization of those two statements would be: “File under: Understatement.”

In case you're interested, among Schiaparelli’s inventions and innovations are: the back-less swimsuit — it had a built-in bra and was patented in the U.S.); camouflage and animal prints; themed — Circus, Zodiac, ethnic — collections (Yves St. Laurent would copy his friend and idol in this regard); dresses made of paper, scarves, plastic (Project Runway’s crazy designer challenges would have been a piece of cake for Elsa); culottes; wedge-heels; graphic, trompe l’oeil knitwear -- it didn't sag due to a technique combining wool and metallic threads ; accessories made of plastic — earrings and a cool “bug-studded collar”; the use of obvious plastic zippers as design elements in couture; overalls; the sleeve-less tank top; ready-to-wear mix-and-match separates; jumpsuits; those big-shouldered power clothes we associate with Joan Crawford at her peak; see-through raincoats; folding eyeglasses; colored hosiery; the shirtwaist jacket; athletic clothes (including her "shocking" split tennis skirt); and fantasy furs. Oh, and the wrap dress.

If this has whet your appetite for Schiaparelli, do look online and find some of her quirky pieces: gloves with gold claws (they look like bear paws to me); her lamb-cutlet and shoe hats, the beautiful “lobster” and “rabbit” gowns. She was also a designer who teamed up with artists for her work, collaborating with Dalí, Kees van Dongen, Christian Bérard, Jean Cocteau and Man Ray. Ever wonder who created the “fashion-show-as-spectacle” in 1935…complete with music and rail-thin models? I don’t think I need to tell you at this point. 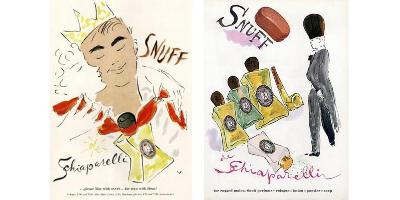 Coco Chanel and Schiaparelli were contemporaries (just seven years apart in age) but they were so different in their style philosophies and backgrounds that there was little chance of a friendship developing. Chanel referred to Schiaparelli as an “Italian artist who makes clothes,” and I’m embarrassed to report that Schiaparelli called Chanel: “…that dreary little bourgeoisie” or “that milliner” (Schiaparelli never learned to sew).

I usually side with the underdog, the “rags-to-riches” character (Chanel in this case)…but though Schiaparelli was a bit of a snob (born into the Italian “aristocracy” and raised in a palace in Rome), she won me over to her side due to her World War II work. During the Occupation, Chanel stayed in Paris and lived at the Ritz with her Nazi officer beau and schemed, using her Nazi connections, to gain control of the lucrative perfume business bearing her name but owned by her partners, the Jewish Wertheimer family who were in exile. (Chanel was unsuccessful.) During the war, Schiaparelli closed her Paris business, moved to New York and spent her time doing relief work for the Allies and the Red Cross, and volunteering as a nurses’ aide at Bellevue Hospital (I'd love to know what she wore on duty).

You can tell I'm a Schiaparelli fan-guy, because that’s probably my longest perfume-review intro EVER, but I think Elsa Schiaparelli deserves a shout-out, don’t you? So many designers have copied her over the years…almost all without attribution. Sometimes I wonder how many fashion writers are familiar with her extensive portfolio and how it relates to what’s being made today.

Schiaparelli’s perfumes for women and men (almost all of which have names beginning with “S”) were as interesting and inventive (the bottles!) as her clothes. The moment I saw the packaging for Snuff3 (a glass pipe housed in a cigar box) I knew I had to, someday, sniff the fragrance. Snuff was released in 1939 and was Schiaparelli’s first fragrance for men. Snuff was still being made in the 1970s (I don’t know the exact date it was discontinued), and over the Christmas holiday, I came upon an unopened bottle of 1970s Snuff at an auction site, and I bought it unsniffed and had it shipped to me from Europe (Snuff was no longer in the pipe-bottle packaging in the Seventies…too bad!) 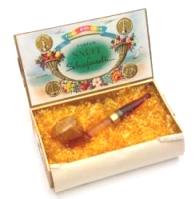 Snuff opens with a whoosh of lavender and moss, a nose-singeing experience. As the opening evaporates, I smell an evergreen note (cypress? pine?) Evergreen leaf aromas persist for quite awhile (existing quite happily alongside a strong galbanum note). As Snuff enters its final stage of development tobacco arrives…a smooth, “liquid” tobacco scent (not smoky or ashy at all). In Snuff’s extreme dry-down, I detect a hint of silken iris, almost powdery, and semi-sweet, old-fashioned musk. Snuff’s character is refined without being “stiff”; it’s a fragrance you can wear anytime: whether you want to be dressy or simply smell good at the office. Though Snuff persists on skin all day, it is buoyant and “cool” and never makes me wish it would “go away.” I’m so glad I bought Snuff (my bottle aged well apparently). To my nose, Snuff is a blatantly “masculine” perfume.

Schiaparelli retired as a clothes designer in 1953 and lived on for 20 more years (her perfume business flourished and made her rich). After her death, Schiaparelli's perfumes, and legend, slowly faded away. Chanel, her wartime "mistakes" forgiven, had a late-life revival of her business. Chanel's name is as famous as it ever was and the Chanel perfume line is prosperous. But this year, things are looking up for Schiaparelli; the fashion house is being revived, and I hope some of the perfumes will be brought back with brio and in the Style (yes, a capital S) to which Schiaparelli, the woman, was always accustomed.

Apart from the two articles referenced in the text, I also read the following articles/books as research for this review: New Yorker, “Scenes from a Marriage” May 23, 2005, Judith Thurman; Universe of Fashion: Elsa Schiaparelli by Francois Baudot, 1997, The Vendome Press; Shocking Life: The Autobiography of Elsa Schiaparelli, Victoria & Albert Museum, 2007; Shocking! The Art and Fashion of Elsa Schiaparelli by Dilys Blum, Philadelphia Museum of Art, 2003.