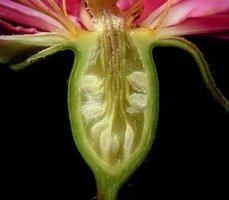 Secrets de Rose is a new fragrance from Les Parfums de Rosine — at least, fairly new, since Rosine's releases usually travel to the United States at a leisurely pace. This Eau de Parfum, described as "a rose in black…mysterious and disturbing," was created in 2009 by perfumer François Robert. It is an "amber floral" with top notes of plum, liquorice, rose essence, bitter orange, and saffron; heart notes of magnolia, ylang, rose absolute, white jasmine, and seeds of cumin; and base notes of sandalwood, Himalaya oak moss, amber resin, labdanum, and musk.

Les Parfums de Rosine has designated Secrets de Rose as the "seductress" of its fragrance family, but this scent really isn't as heady or animalic as the promotional text would have us believe. Its opening note of bitter orange, accompanied by a breath of cumin and anise, is almost androgynous; there's also a hint of something that I can't place, except that it reads as "sour green" to my nose (perhaps galbanum?). Within a half hour, however, Secrets de Rose blooms into a feminine rose-saffron heart that's smoothly blended and long lasting. A little saffron goes a long way in my personal preferences, especially when it's combined with floral notes — The People of the Labyrinths A.MAZE, for example, had too much saffron and not enough rose to please me. Secrets de Rose, on the other hand, keeps the saffron light and sheer, so that it doesn't overwhelm the velvety idea of rose petals. As the fragrance dries and deepens, this pairing is framed with a wine-y plum-and-woods accord that reminds me of Sonoma Scent Studio Vintage Rose. The final impression of this composition, lingering on the skin for hours, is the sort of dusky, ambered rose note that I'm always happy to encounter. The fact that it appears late in this fragrance's development makes me savor it even more. 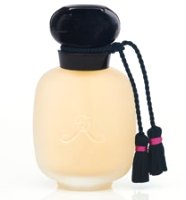 To draw an art-historical analogy, Secrets de Rose's "rose in black" isn't quite the seductive and shocking Madame X that Les Parfums de Rosine promises, but that's just fine, because it turns out to be more like John Singer Sargent's Portrait of Elizabeth Winthrop Chanler, artistic and poised and just a bit elusive. Secrets de Rose could could be applied lightly for daytime in the fall and winter, and more generously for evening wear all year round. Overall, this fragrance is nicely done, and I'd choose it over several of the other recent Rosines. Secrets de Rose will probably never rival Poussière de Rose (my favorite!) or La Rose de Rosine  in my affections, but I wouldn't mind owning a full bottle of it at some point. I've heard that Secrets de Rose is a limited edition. Fortunately, Rosine's limited editions tend to stay around for a while, so I'll look forward to revisiting it.