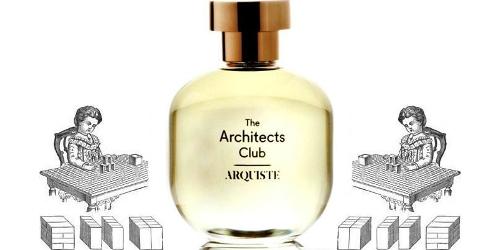 Cocktail time, March 1930, London: A group of architects gather for cocktails at Mayfair’s smartest Art Deco smoking room. As they settle in the warm interior of dark woods, leather and velvet, London’s bright young things burst in, frosted martinis in hand, surrounded by a cloud of laughter, white smoke and fine vanilla.

That's Arquiste...talking about the inspiration for its latest perfume — The Architects Club. The fragrance was developed by one of my favorite perfumers, Yann Vasnier, who was guided in its creation by the imagined aromas of “the smoking room at Claridge's in Mayfair” circa 1930. After smelling The Architects Club, I had to tweak the PR:

After-School Pick-Up, September 2014, Seattle: A group of parents gather for lattes at Wallingford’s smartest cup cake café. As they settle in the bright interior of turquoise-colored wood, retro white and black floor tiles, and chrome and vinyl seats, Seattle’s confident, over-indulged toddlers burst in from the daycare center downstairs, book bags in hand, surrounded by a cloud of squeals, vanilla icing and baking cakes.

The Architects Club is a sheer, gourmand(ish) scent with good sillage and lasting power, and when I smelled it for the first time, I didn't think of smoking clubs or cocktails but children; it would be a good cologne (sweet, vanillic, light, clean) for youngsters.

The Architects Club lists juniper berry oil, angelica root, lemon peel oil, bitter orange, pepperwood, guaiac wood, oak, vanilla absolute and amber as notes, but just a few of those notes stand out in this sheer woody-vanilla cologne. The Architects Club goes on smelling of sneeze-inducing alcohol and dry vanilla, mixing with a hint of orange (likewise dry, not juicy). There’s also a green-cinnamon odor in the background (leafy in character, but a tad foody as well…and very fleeting). See-though wood aromas (accent on guaiac) come to the fore quickly, meld with the vanilla (which is sweeter, and a tad heftier, in the base) and take you through to the finale, where a sweet/fresh musk emerges.

The Architects Club is available in 100 ml Eau de Parfum for $190; the pricing of this scent astounds me (but I’d better get used to it…seems the cost of perfume rises each month). For buying information, see the listing for Arquiste under Perfume Houses.