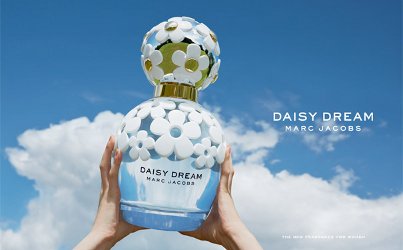 Daisy Dream is the latest from Marc Jacobs. If you pay attention to perfume at all, you probably already know it's a flanker to 2007′s Daisy, a fragrance that's been fantastically successful1 and already spawned a number of spin offs. The success is deserved, in my opinion. Daisy is not the best perfume made in the last 10 years, mind you, not even close, but it's about as pleasant and wearable as they come. Despite its obvious orientation towards the youth market, Daisy has a kind of easygoing cheerfulness that transcends age categories, and the packaging is genius. Even an old perfumista curmudgeon like me finds Daisy likable.

I admit I have not paid all that much attention to the flankers. I did review Daisy Eau So Fresh, but I skipped the next two paired sets of flankers: Daisy Sunshine and Daisy Eau So Fresh Sunshine, Daisy Delight and Daisy Eau So Fresh Delight (do comment if you tried any of them). Daisy Dream caught my attention mostly because of the addition of coconut water in the notes — I hoped it might be a light version of the sort of beachy slash suntan oil fragrances that have become so popular over the last few years. That it was supposed to be more sophisticated than the original Daisy was a possible plus as well, and hey, I would not mind owning that adorable little 30 ml bottle (see picture below).

Like the rest of the Daisy series, Daisy Dream is a fresh fruity floral. It starts with fruits, primarily blackberries and pear. It's a bit strong and sweet, but not for long — it's light and breezy within 20 minutes or so, and it stays that way for the duration. The rest of the notes (grapefruit, jasmine, lychee, blue wisteria, white wood, musk and coconut water) are mostly a blur; it smells, as Daisy did, like random flowers, but a bit less like Daisy's 'grassy field' and a bit more like 'department store perfume'. The base is pale musky woods, and the coconut water does, indeed, smell more like coconut water (i.e., like nothing) than like coconut. You probably won't even notice it, and Daisy Dream isn't beachy in the slightest.

Verdict: it's fine and it didn't kill me to wear it, yadda yadda yadda, but still, a big meh. The early stages don't quite hit the 'massively likable' target as well as the original Daisy, and I will be really surprised if anyone finds it more sophisticated — if anything, it smells more like a standard issue youth-oriented fruity floral. If you do like the early stages, be warned: it fades to bland sooner than you'd expect, even for an Eau de Toilette. After an hour or so, it smells like the wan remains of the not-that-great perfume you put on five hours ago. Shame, because that's a great bottle (I think it's the best of the Daisy series so far).

The quick poll: now that the year is half over, what do you think has been the best new perfume of 2014?

Marc Jacobs Daisy Dream was developed by perfumer Alberto Morillas. It is available in 30 ($52), 50 ($76) and 100 ($94) ml Eau de Toilette and in matching body products; there is also a rollerball but I don't know the exact size.