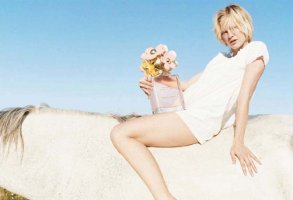 Daisy Eau So Fresh is the latest from Marc Jacobs, and it's reportedly going for a younger audience than the original (and very popular) Marc Jacobs Daisy. Daisy, which came out in 2007 (time flies!) had a pleasant and likable juice — fruity floral, but not too fruity and not too floral. It also had a well-known designer name, a young, laid-back advertising campaign, plus a massively cute bottle. It was easy enough to see why it sold like gangbusters.

That anyone on earth would smell Daisy and think 'wow, that's just too mature for me' seems somewhat unlikely, but whatever: they've already done a stronger version, and now we have Eau So Fresh, the lighter version. Wisely, they made some minor, pinkifying alterations to the bottle, but they kept the design reasonably close to the original. If you were dying to own the Daisy bottle, you might reasonably be expected to want this one too.

The juice follows the same trajectory. The top notes are marginally less deep than Daisy's, but they're also fruitier and sweeter: the opening is closer to a berry fruit punch, and Daisy Eau So Fresh stays fruity longer into the dry down. Daisy's floral heart was not exactly what you'd call rich, but Daisy Eau So Fresh is even lighter; it still "does a pretty good job of evoking a sunny, breezy meadow of random flowers", there's just a bit less emphasis on the flowers. The woody-musky base is likewise a bit paler and cleaner.

I'm not a big fan of berry fruit punch so I prefer the original, but they're close enough to each other that it doesn't seem worth making much fuss over. If I ever buy any form of Daisy it will be because the vinyl flowers — not the fragrance — finally sucked me in.

At the moment, they aren't doing sizes smaller than 75 ml, but if it sells, no doubt we'll see a rollerball and other variations. Perhaps another solid perfume ring? Meanwhile, the larger sizes make sense: Daisy Eau So Fresh doesn't last quite as long as Daisy, so presumably you'll need to reapply more frequently. 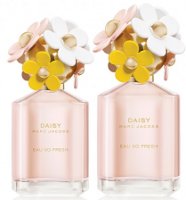