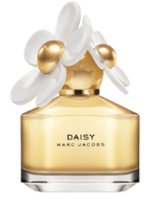 Marc Jacobs's new Daisy fragrance is meant to be "happy and youthful", and "more accessible than the signature range" and "sophisticated but not too serious". In other words, it's meant to bring younger consumers into the Marc Jacobs fold. I'm way past the target age range (said to be 18-24), but I was taken by that bottle right off the bat. It is way cute. I was worried that it would be way less cute when I saw the plastic daisies in person, but nope, it is maybe even more way cute in real life.

Daisy the fragrance is a pretty good match with Daisy the bottle. It is young and light and fresh, feminine but not sexy, easy to wear, and massively pleasant. It starts with fruit (wild strawberry, red grapefruit), neither heavy nor overly sweet, tempered by a touch of greenery (violet leaves). The floral notes in the heart (gardenia, violet, jasmine) are well-blended and sheer, and while daisies themselves have no scent, Marc Jacobs Daisy does a pretty good job of evoking a sunny, breezy meadow of random flowers. The base (musk, vanilla and white woods) is pale and clean and middling warm, and only lightly vanillic.

As you can probably already guess from the quotes in the first paragraph, Daisy isn't likely to stun anybody with its originality, but it works well for what it is: an entry level scent for a mainstream brand that isn't known for its challenging fragrances anyway. For such a thing, it is darned likeable. Despite the attractions of the bottle, I don't like it well enough to actually buy it, but I'd guess many women will.

If such things appeal to you, you can play around at the daisymarcjacobs site and grow virtual daisies and win prizes and whatnot. There is also a form to request a free sample.

If growing daisies online doesn't appeal, perhaps you'll like this picture of Marc Jacobs in a tutu instead.

Marc Jacobs Daisy was developed by perfumer Alberto Morillas. It is available in 50 and 100 Eau de Toilette and in Velvet Body Butter & Bubbly Shower Gel. (first quote via Women's Wear Daily, second via moodiereport, third via cosmeticsint.co.uk, Marc Jacobs in a tutu image found via Rosie & March of Perfume Posse)