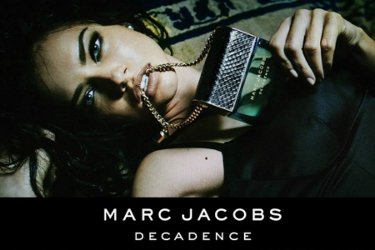 I felt like the next story to tell was one of this indulgence of pleasure and luxury, because that’s what decadence is. And I had to tell that in a way that was irreverent, which is very much part of who I am and how we tell stories, which is with an offhanded, irreverent sense of glamour, rather than first-degree glamour — something a bit more unconventional.1

So says Marc Jacobs, who has released a new feminine fragrance called Decadence for fall. Decadence was developed by perfumer Annie Buzantian and is a "sensual, luxurious, woody fragrance" with top notes of plum, iris flower and saffron; heart notes of Bulgarian rose, jasmine sambac and orris; and a base of vetiver, papyrus woods and liquid amber.

When I spritzed Decadence on a blotter at my local Macy's and took a deep whiff, I gasped and recoiled (to the amusement of the security guard keeping an eye on things). It opens with something sharp and harsh that I can only describe as "knitting needle up the nostril." It is some kind of aldehyde? I do not know. Despite this experience, I requested a sample of Decadence at the nearby Sephora and tested it for a few days.

Fortunately, that piercing introduction — like the feedback shriek from a microphone when someone first steps up to it — fades out after a few minutes on skin. The saffron and plum top notes become noticeable. The jasmine and other florals in the heart are whipped together into something subtle but still synthetic. The base gradually surges up to take over the composition, and it's a contemporary woody amber that also nods to the idea of a very contemporary chypre. The dry down is a touch vanillic, which should please many wearers. Overall the whole thing is pleasant, if a bit blunt and linear. Decadence reminds me slightly of J. Crew No. 31, with rougher edges. Actually, it seems like a few other high-end department store fragrances I've tried, but I can't seem to remember exactly which.  (If you've tried it and it reminds you of anything else, feel free to comment!)

In a recent profile of Marc Jacobs in The New York Times, the author noted, "Marc himself says he doesn’t have a signature: There is no one silhouette, style or technique you can point to and say 'that’s Marc.' There is, however, a recognizable Marc Jacobs woman."2 If you follow fashion, you can probably name one of Jacobs's longtime muses — Sophia Coppola, Winona Ryder, et al. And yet — there's a Victoria's Secret Angel in the Decadence ads? I never would have nominated Adriana Lima as the face of any Marc Jacobs product. The visuals seem more like something from Gucci or Dolce & Gabbana; again, somewhat generic.

As a fragrance, Decadence doesn't feel at all "irreverent," and it falls short of truly "indulgent" or "glamourous." However, it over-compensates for its failure to deliver on Marc's original promise with its packaging, a bottle designed to resemble a handbag with a (faux) python flap, a gold chain, and a silky black tassel. It's not the first perfume bottle shaped like a purse (remember Anna Sui Dreams?), but it's certainly the most lavishly realized. 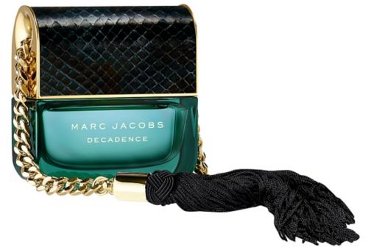 Okay, okay; I'm probably not the target customer for Decadence. That much is clear. If, however, you're a fan of Daisy and Lola and you're ready to graduate to a perfume with more depth and richness, possibly for evening wear, this one may be worth a try. And if you just want to collect the purse bottle, that's as good a reason as any to pick up Decadence.

2. Via Who Is Marc Jacobs? in the New York Times. The articles goes on to describe the archetypal "Marc Jacobs woman" this way: "She appears more out of time than out of place: Her skirt is calf-length and conservative with unsexy heels, but her T-shirt is sequined and see-through. Or she’s wearing polka dots with broderie anglaise and dirty sneakers, or she’s dressed like a disco queen in Daria glasses. She has an arsenal of Peter Pan collars and colored furs and brooches, but her hair looks like it was cut in the dark and her handbag matches nothing exactly."