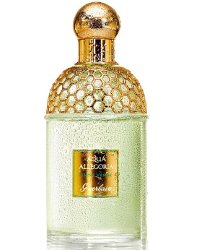 When I reviewed Lys Soleia back in 2012, I said I have something of a love-hate relationship with the Aqua Allegoria range from Guerlain. Aqua Allegoria started out as a youth-oriented line highlighting natural materials, but it's evolved, over the years, to something better expressed by the tag line they now use on some of the advertising: "the collection of fresh fragrances". And as "fresh", likewise, has evolved over the years to mean synthetic clean notes instead of things that are naturally fresh, like sparkling citrus and light florals, so the Aqua Allegorias have followed suit. My main complaint with Lys Soleia, and Jasminora before it, was how close they came to smelling like scented laundry products.1

In its favor, Limon Verde, the latest Aqua Allegoria, does not smell like laundry products. Its inspirations, expressed as the exhortation to "savour a Caipirinha under the lemon trees along the Amazon River", fit well with this year's emphasis on Brazil and the upcoming 2014 World Cup.2 Limon Verde's notes tell most of the story: cachaca, lime, cane sugar, fig, tonka bean and tropical fruits. So, the opening is a very green citrus. It's bright and terribly crisp (Bois de Jasmin notes a "razor sharp green accent", which is fair enough) and not at all sparkling, in the way that green citrus often is these days — it doesn't smell like laundry detergent, but it does vaguely recall air freshener. That is, it smells more like "citrus product" than like citrus.

The dry down is sweeter and fruitier and figgier, figgy enough that they might reasonably have called it Limon Figue (although of course they've already done Figue Iris). It doesn't recall a caipirinha to me, but it does have a tropical cocktail vibe, and the dry down is just creamy enough to almost, but not quite, smell like coconut. The base is pale musky wood. As you'd expect from an Aqua Allegoria, it's not likely to make it through an 8 hour day, but the lasting power is reasonable for a summer-y Eau de Toilette. I would call it a unisex, although I believe this line is marketed solely towards women.

Verdict: Limon Verde is pleasant enough, and I found it wearable, but it didn't evoke any strong reaction either way: I don't love it and I don't hate it. It didn't particularly say "Brazil" to me, but then, I've never been to Brazil. The Brazil of my imagination is better expressed by something like L'Artisan Batucada (which they seem to be relaunching at the moment) or Bahiana by Maître Parfumeur et Gantier, both of likewise take cues from the caipirinha, and both of which I found far more fun than Limon Verde. Both, of course, also cost more than the Guerlain.

If you have a favorite Aqua Allegoria, do comment! The last one I bought was Mandarine Basilic, and it's still one of my most-used summer citrus scents.

Guerlain Aqua Allegoria Limon Verde was developed by Guerlain perfumer Thierry Wasser. It is available in 75 and 125 ml Eau de Toilette (Guerlain, so far, does not appear to be interested in joining other youth-oriented brands that have moved to smaller sizes).

1. I cannot comment on the last Aqua Allegoria before Limon Verde, Nerolia Bianca, because I never tried it, indeed, I never even saw it. The Aqua Allegoria range is not widely distributed in the US, although Sephora has more than most stores.