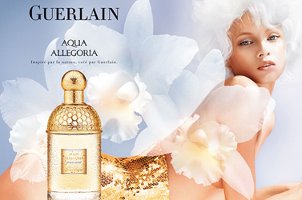 Jasminora is the latest addition to the Aqua Allegoria range at Guerlain. You old-timers already know the drill: the Aqua Allegorias were introduced in 1999 as a youth-oriented, (relatively) reasonably priced line that was supposed to showcase particular natural materials; they generally add two new light-and-summery fragrances a year, and only those that do well hang around (they're essentially limited editions). Some years I like them and some years I don't, but I do own a few of them, in fact, most of the modern-day Guerlains in my collection are from this range — I own Herba Fresca, Anisia Bella and Mandarine Basilic, and if a cheap bottle of Laurier Réglisse came my way, I'd buy that one too.

Last year, if I'm not mistaken, was the first time they released Aqua Allegoria fragrances that weren't named for specific notes. Flora Nymphéa and Bouquet Numéro 1 were mixed florals, although only the first one went into general distribution in the US. This year, they're back to form with Jasminora, which is a light summery jasmine. It's in what I think of as perfumer Thierry Wasser's "young, fresh and dewy" style, in fact, it has a lot in common with Flora Nymphéa (and by extension, Idylle) although it's very clearly focused on the jasmine note.

It starts with a little burst of citrus and soft greenery. For a few minutes, the lily of the valley is front and center, and several reviewers have noticed something in the background that smells like a very soft lilac. Then it's mostly jasmine, middling sheer, dewy and green, and very bright. The white musk dry down is soapy-clean and very persistent— Jasminora is longer lasting than many others in the Aqua Allegoria line, and the longer it's on skin, the cleaner it gets.

Jasminora is soft rather than crisp, smooth rather than deep, and romantic rather than sexy. If you've been looking for a casual daytime jasmine without even a hint of indoles, this might just be the one for you. It's far too clean for my taste, and the dry down eventually feels a little flat; for a light summer jasmine, I'll stick with the shorter-lived (and spendier!) sparkle of Thé Pour Un Été from L'Artisan. If you want something cleaner (and cheaper) than that but not quite so relentlessly clean as the Jasminora, try Jo Malone's White Jasmine and Mint.

If you have a favorite summer jasmine I haven't mentioned, do comment!

Guerlain Jasminora features notes of galbanum, bergamot, cyclamen, jasmine, freesia, lily of the valley, musk and amber. It can be found in in 75 and 125 ml Eau de Toilette.