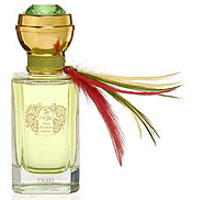 Maître Parfumeur et Gantier released Bahiana earlier this year to celebrate "The Year of Brazil in France". The fragrance is geared towards a younger market than the brand usually targets, and at the time it was launched, they had not yet decided whether it would be a limited edition or part of the regular line. It features notes of Brazilian orange, caïpirinha lemon, yellow mandarin, tagette, green leaf, rosewood, gaiac wood, elemi, amber, musk, and coconut.

I have only tried Bahiana twice, and rather quickly at that, so these are early raves but I think I have found another summer favorite. The top notes are, like yesterday's Ananas Fizz, evocative of a tropical drink, but in this case the cocktail is a caipirinha, the popular Brazilian mixture of lime, sugar and cachaca (a liquor distilled from sugar cane). It calms into the scent of dry tropical woods, and as the citrus fades, it takes on a bit of tropical fruit — maybe pineapple, maybe not. Whatever it is, it is used judiciously, as the overall effect remains more dry than sweet.

Bahiana is somewhat reminiscent of Ananas Fizz, actually, and also calls to mind Hermès Jardin Sur Le Nil. It does not smell exactly like either, but is something like a missing link between the two: if you found Ananas Fizz too cedar-y or Sur Le Nil too high pitched, this might be just what you are looking for. Personally I may just need all three, along with Eau Exotique by Parfums de Nicolaï, to round out my summer tropical fruit collection. It is nice to have choices.

I cannot decide if I like the feathers on the bottle. Are they jaunty, or just silly?