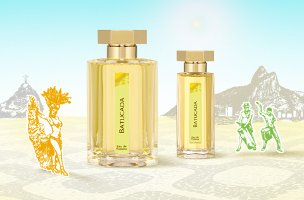 Many of you will remember that niche line L'Artisan Parfumeur used to do a limited edition unisex summer fragrance every year. Usually, it was something fleeting and happy meant for hot weather wear, packaged in a whimsical bottle and sold at a slightly lower cost per ml than the regular L'Artisan line. If the fragrance did well, sometimes it ended joining the regular line. So far as I can tell, they haven't done one since 2006, when they released Mandarine Tout Simplement.

Batucada, L'Artisan's latest fragrance, is not a summer limited edition. It might be the latest in the travel series, I'm not sure — and it doesn't really matter: the point is, it doesn't get a fun bottle and it costs about the same as the rest of them. It would have fit right into the summer limited edition line-up, though: it's cheerful and summer-y, and light-hearted in a way that we haven't seen from L'Artisan lately.

It was inspired by the Brazilian samba style of the same name, and by Brazil in general. The opening takes its cues from the caipirinha, the national cocktail of Brazil — cachaça,1 sugar, lime. (Batucada adds a whole slew of other fun-in-the-sun stuff, cocktail and otherwise.2) The top notes are juicy sweet citrus, quickly coming into focus on tart green lime. Coconut, a reference to the  fresh coconut water sold by vendors on Brazilian beaches, joins in the mix early on, but it's only strong for a brief while, after that, it's a milky undertone; it never really mimics suntan oil.3 The heart is tropical florals with mildly fruity undertones, but they're done with a very light hand —  if you're after a heady feminine tropical floral, you'll need to look elsewhere, as Batucada is too light to qualify, and it's entirely unisex (to my nose, anyway).4 The dry down is a dry-ish blend of pale woods and "salty skin warmed in the sun". The aquatic notes, thankfully (for me) are mild at most. Some wearings, I noticed a vague bit of melon here and there, some wearings, I didn't.

Batucada is more sophisticated than your average cocktails-on-the-beach fragrance, but still, it's fun. It's a perfect winter antidote for those of us who detest cold weather, and it has just enough depth and lasting power to hang on despite the chill — it's not a powerhouse, mind you, but it's nowhere near as fleeting as some of the summer scents L'Artisan has done in the past. I'd think it would wear quite nicely in warm weather too, but sadly, I've no way to test that right now. Will I buy it? Probably not. It's extremely likable, but it's not my favorite of the summer-y L'Artisan fragrances — and I'm so far behind on my buy list that I haven't even bought Vanille Absolument or Traversée du Bosphore yet. For the umptillionth time, I am wishing that L'Artisan still sold everything in 15 ml.

L’Artisan Parfumeur Batucada was developed by perfumers Karine Vinchon and Elisabeth Maier. It is available in 50 ($100) and 100 ($145) ml Eau de Toilette.

1. Cachaça is fermented sugar cane, and is similar to rum, which is usually (but not always) made from fermented molasses. More caipirinha: Maître Parfumeur et Gantier Bahiana, Frederic Malle Outrageous, Nina Ricci Nina.

4. Feminine tropical florals (that a man can certainly wear if he wants to; we are not laying down rules here): Annick Goutal Songes, Ormonde Jayne Frangipani or Chantecaille Frangipane, Serge Lutens Datura Noir.