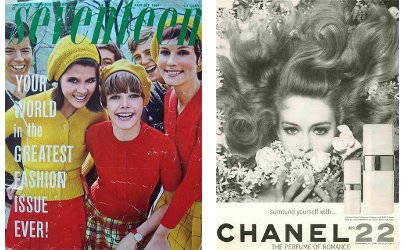 After perusing a Seventeen magazine from August 1967, I’ve come away with three observations: First, plaid was in. Second, so were Orlon, Dacron, Dynel, Kodel, Avril Rayon, and something called Celanese acetate. Finally, teenagers sure had sophisticated taste in fragrance. This issue, labeled “Your World in the Greatest Fashion Issue Ever!” is a fat one, so let’s get started.

The first perfume ad is a two-pager for Chanel No. 5. It features a man in a skinny tie with a football in one hand touching the chin of a blond clad in plaid Orlon. Perfume is $8.50, and Eau de Cologne will set you back $3.50. “Caught…By the spell of Chanel,” it says. Four pages later is another Chanel ad, this one for No. 22 (“The perfume of romance”). A blond’s head is buried in fabulous heaps of lilies of the valley, roses, and jasmine. Just a few more pages in, we hit Lanvin Arpège Powdered Mist for $3.50 (“Promise her anything…but give here Arpège”). Pretty sophisticated, huh? Not a fruity floral in the bunch.

Let’s flip past the tanning ad featuring Johnson’s Baby Oil (hello, melanoma) to land on a gorgeously shot ad for Houbigant Chantilly. It shows the outline of a woman leaning over a faceted glass bottle of yellow fragrance, as if she were looking into a crystal ball. “Crystal gazing, 1967. No waiting for the future. This is crystal you can believe in. With enough Chantilly to shake your world.” Just a few pages later, Evyan advertises a beach and travel atomizer of White Shoulders, two ounces for $2.75. (I never would have thought of White Shoulders as a beach perfume, but I guess if Coty Sand & Sable can do it, why not?)

After a few pages of neon plaid, we come to a half-page ad for Jean Naté. “Tingle at the touch of Jean Naté,” the copy reads next to a blond emerging from a shower stall, where she appears to keep a fern the size of a German shepherd. More orange plaid, gold plaid, red checks, and we arrive at another Evyan ad, this one showing fancy bottles of White Shoulders, Most Precious, and Great Lady nestled in satin.

More plaid (Hey Seventeen. Scotland called and wants its plaid back) is relieved at last by a lovely spread of B. Altman cocktail dresses, each with kicky ruffled trim at the hem. And then four pages of B. Altman checks and plaid. And then a full-page ad for Caron Fleur de Rocailles (“Caron is the kind of French every girl understands”). This ad focuses on a large, heart-shaped face tilted toward the perfume bottle, with the charcoal-lined eyes glancing with suspicion toward the orange plaid pants on the adjoining page. 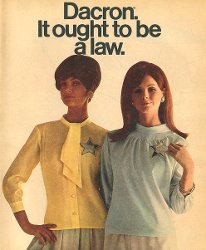 An ad for wool claims a spot amidst the polyester, and it lists regional department stores, many of which have since vanished: Woodward & Lothrop, Carson Pirie Scott, Meier & Frank, Kaufman’s. On the next page, Debutogs proclaims, “Dacron. It ought to be a law.”

At last, another perfume ad, this one for Bourjois Evening in Paris. (“You’re there—when you wear Evening in Paris”). A loafer and plaid-suit-clad blond leans into a dapper gent resembling Bobby Sherman. Notre Dame looms in the background. Continuing the French theme, in the corner of a big spread for Bobbie Brooks separates in “billiard green, squash yellow, and radiant red” is a tiny gold atomizer of Bobbie Brooks C’est Wild fragrance. Anyone heard of that one?

A charming candid photo of a woman eating cake while she relaxes with her fishing tackle says, “Aren’t you wearing Tweed?” (I need to do a review of Lenthéric Tweed someday.) Tweed was marketed to the outdoorsy gal, but for the naughtier teen, we have the classic Dana Tabu ad with the maestro clutching the pianist in a passionate kiss. In a more modern ad, a couple in an amusement park shill Cashmere Bouquet (“From Monterey to Montreal join the swing to Cashmere Bouquet”).

Now the perfume ads have thinned out as we hit a clump of ads for panty girdles, more plaid, and killer pink slippers with a jeweled puff on the toe. But wait! Here’s a classic ad for Christian Dior Diorissimo (“So very you…So very Dior!”) with an illustrated hand lifting a bottle from its houndstooth box. Now more panty girdles and a curious ad for a wiglet. We’ve hit the fashion spreads, so I don’t expect as many perfume ads.

Excuse me a few minutes while I read an article about The Monkees...fascinating, but I’ll stick to my Rolling Stones. Here’s an article about over-the-counter medications that recommends aspirin for menstrual cramps (let’s hear it for today’s ibuprofen, my friends) and warns against Dexedrine and “other pep pills.” And here’s a recipe for Spam Beaneroo. An ad for Wonder Bread reminds girls that “boys love to eat,” so they should stock up on Wonder Bread sandwiches. (Frankly, I’d rather lunch on Spam Beaneroo.)

Now we’ve reached the back of the book, where ads for engagement rings, china patterns, and hope chests abound. I guess it’s only logical, given that your Wonder Bread sandwiches have landed you a man. But here’s an ad for Nina Ricci L’Air du Temps (“So young, so slim, so French it’s pure amour at $4”). And another for Fabergé Brut where the bottle still has its darling silver-tone necklace (“If he has any doubts about himself, give him something else”).

Now here’s an odd ad: it’s for Modess, which brands sanitary napkins, right? Yet there no hint of the curse in sight. Instead, the ad features a middle-aged woman in a full gold brocade hostess gown with a floor-length matching coat. The ensemble weighs ten pounds if it weighs an ounce.

Only a few more pages now. And what have we here? The exact same Tabu ad that ran earlier. Then a quarter-page ad for English Leather (“After shave…After shower…After hours”), including a tube of English Leather hair dressing. Then a faded quarter-pager for Yardley powder (“Oh! The POWder of Luv”). Then the classic “talent appraisal free” ad where you send in a drawing of a clown or a horse’s head and they tell you if you’re good enough to qualify for their mail order art instruction school out of Minneapolis.

And…that’s it. Some gold plaid pants from Ship’n Shore, and we’ve reached the end. My conclusion about 1967? You can keep the Orlon and panty girdles, and I’ll take the perfume.