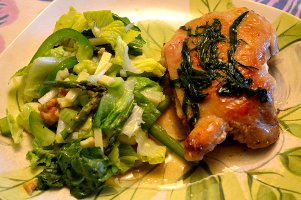 During the recent heat wave, I spent a lazy afternoon on the couch with the fan pointed at me while I perused the July 1955 issue of Woman’s Home Companion. I was looking for the article featuring Lilly Daché’s “Secrets of Lifelong Glamour,”1 when I stumbled across these words and sat straight up:

Like most Frenchmen, Balmain appreciates good food and takes a great interest in his own table. In the warm summer days ahead you might like to try his “Vent Vert” salad. Here is the recipe he gave me—if you can’t get some of the ingredients, you can eliminate or substitute as you choose.

Cut young romaine into pieces to make 1 quart. Add 1 cup each of diced celery, chopped endive, thinly sliced green pepper and about 8 asparagus tips cut in half. If available you may add some leaves of corn salad, sometimes called lamb’s-quarters. Add 1 tablespoon Beaufort cheese (you may substitute Swiss cheese) cut into thin strips. For the dressing combine 1 tablespoon white wine vinegar and two tablespoons walnut oil (you may substitute olive of salad oil); season with salt and black pepper. Toss with greens until lightly coated with oil. Serve in large salad bowl and sprinkle with 2 tablespoons of chopped walnuts.

Well! I emailed the recipe to Robin right away, and she pointed out that Alice B. Toklas included the recipe in her cookbook. That made sense. Gertrude Stein and Pierre Balmain were old friends. Stein even sat in the front row at Balmain’s first fashion show in 1945. (During the show, one of his models walked the runway with Balmain’s Airedale, Sandra, who chose that moment to pick a fight with Stein’s Poodle, Basket.)

I hustled to the bookshelf and pulled out my battered paperback copy of The Alice B. Toklas Cook Book. There it was, in the “Recipes from Friends” section, written with more demanding detail than Biddle's recipe:

Cut in small right angles, not omitting the stalks, the hearts of young romaine salads. Add celery, endives, sweet green peppers and asparagus tips, a quarter of the volume of the romaine salad for each of these last ingredients. Add to this some leaves of corn salad from which the stalks have been removed to make little perfect ovals and about 1 tablespoon per person of Beaufort cheese, Savoyard cheese of the Gruyère type cut into thin matches.

Prepare a salad sauce with salt, Indo-China pepper, white-wine vinegar and walnut oil (1 tablespoon vinegar to 2 tablespoons walnut oil). Carefully peel 2 fresh walnuts per person, cut them into very small pieces and sprinkle on the salad, which is to be served in a green unbaked earthenware salad bowl.

But wait! There's more. Alice included a recipe for Vent Vert Chicken, which she insisted accompany the salad:

Choose young chickens of about 1 lb. each (2 chickens for 3 people). Carve them uncooked as if they were cooked (legs, wings and breast—put the carcass and the giblets aside). Make a strong bouillon seasoned with thyme, laurel, cloves, onions, celery salt and Indo-Chinese pepper.

Half an hour before serving, sauté in butter over low heat for and ½ hour the pieces of chicken, with salt and pepper. To serve place on a silver dish. Pour the prepared bouillon with a dash of brandy into the casserole. Stir to incorporate the glaze into the sauce. Then add a large handful of chopped fresh tarragon and let it come to the boil. Cover the pieces of chicken, placed on the silver dish, with this tarragon sauce. Fresh cream may be added according to taste. (Personally I prefer the chicken without cream.)

Now you know what I did Saturday night. Don't tell Alice, but I had to make a few substitutions. For the salad, mâche (corn salad) is out of season here, so I couldn't make "perfect little ovals," darn it. Beaufort cheese also comes — and sells out — in the spring at my favorite cheese shop, so I used Comté, instead. I pressed my dinner guest into service cutting "small right angles" of romaine and matchsticks of cheese and green bell pepper and beheading asparagus. And, sadly, I don't have an unglazed green earthenware bowl and had to settle for a blue one.

For the chicken, I quickly learned you can't get one-pound birds unless you're in a position to slaughter your own pullets, so I settled for thighs and legs from pastured hens from a local family farm. For the bouillon, I pulled some homemade chicken stock from the freezer, then let it simmer with bay leaves, clove, thyme, and onion for an hour before making the chicken. Alice said she preferred the dish without cream, so I skipped it.

Verdict? It was delicious! Besides all the chopping,the trip to the liquor store for brandy, and bouillon simmering time, it was a relatively fast dinner to pull together, too. The butter the chicken cooked in browned, adding a terrific nutty flavor that complemented the salad. I'll be making salad dressing with walnut oil all summer now.

As we sat down to eat (anointed with vintage Vent Vert Extrait, of course), I squinted and imagined my spotted mutt was a poodle, a Picasso hung on the wall, and the front garden was the summer-warmed French countryside. We cleaned our plates.

1. More on this in a future post, I hope. Lily Daché, a famous milliner, married an executive at Coty and had firm opinions about perfume.