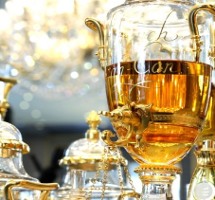 Parfums Caron was founded in Paris in 1904 by Ernest Daltroff. Daltroff was a self-taught perfumer, and was responsible for the house's early fragrance releases. His partner and muse was Félicie Wanpouille, who took over the fragrance packaging and, after Daltroff's death, the management of the company.

Daltroff fled Paris for the United States in 1939 and died two years later. Daltroff's assistant Michel Morsetti continued to create new fragrances for the line, some of them based on formulas left in Daltroff's notes.

In 1988, Parfums Caron was purchased by the Alès Group. In 2018, it was sold to Luxembourg-based Cattleya Finance.

At major department stores or at the online fragrance discounters. The "urn fragrances", so called because the parfum is kept in an urn which is used to fill the bottle chosen by the customer (see image above), must be purchased at one of the the Caron boutiques. There is a list of locations on the website, or see a report on the New York boutique.

See all articles on Now Smell this tagged Caron.

See also: review of the book Caron by Jean-Marie Martin-Hattemberg.