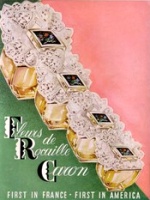 A few weeks ago I bought a November 1937 issue of Harper's Bazaar at a yard sale. It was a warm afternoon, and I brought the magazine home, poured myself a glass of iced tamarind mint tea, and sat on the couch with the fan whirring quietly in the background. Then I settled for a few hours into a different world.

In those days, Harper's was a magazine of aspirations. The first few pages are ads for Bergdorf Goodman and feature a pouty Danielle Darrieux modeling a lamé gown, an ermine cape, and metallic Delman evening slippers. The lines of the dresses in the ads to follow show the late 1930s strong shoulder and shoes with high vamps. Almost five ads feature the new Talon "slide fastener" (known to us now with its catchier name, "zipper") touting how smoothly it closes a garment ("Talon fastener in the placket accounts for that slick hipline").

The magazine's first perfume ad is a two-page spread announcing the launch of Prince Matchabelli Infanta, "the most disturbing perfume of the year". A few pages later is an ad for a Charbert gift basket with a lipstick and a small cologne, available in Drumbeat, Of Thee I Sing, Gardenia, or Carnation for $5. Next comes a black and white ad for Guerlain showing a sharkskin tray holding ounce-sized parfum bottles of Shalimar, Vol de Nuit, L'Heure Bleue, and Sous le Vent. (My heart skipped a beat seeing Sous le Vent.) A few pages later is an ad for Corday Voyage à Paris — "for women who live with a lilt to the hilt for today — heedless of yesterday — and with a 'Nichevo' for tomorrow!" A little later still is a full page for Lucien Lelong Impromptu, showing a drawing of a mod bottle resembling an elongated Space Needle with a ribbon rippling up the background of the ad. And here's a simple ad for Caron Fleurs de Rocailles, "the most delightful perfume for 1937" showing the perfume bottle festooned with a giant paper doily.

Before we go on to the feature articles, let me pause for a second at the ad for a gorgeous Orrefors crystal bowl designed by Georg Jenson for $16.50 and the ad promising that anyone can Learn to be Charming by taking a mail-in charm test and receiving lessons through the Margery Wilson school ("When a woman reflects her innate Charm all else of value follows as naturally as flowers turn to the sun."). It pains me, too, not to have room to read you the essay about lipstick as "the Red Badge of Courage".

In the heart of the magazine is a profile of Contessa Nicoletta Visconti di Modrone, a morose but ethereal brunette. She poses in Ventura gowns in her palazzo in Venice with her daughter, Violante. Then comes a two-page orange and terracotta rendering of the first night at the Opéra Garnier by Raoul Dufy, followed by models in Vionnet jackets, a short story by Frank O'Connor, and Man Ray photographs of the latest hats. Then we have an essay by Elsa Maxwell called "I Have Lived by my Wits", a display of Cartier and Madame de Vilmorin jewels, drawings of negligees, and an article on women journalists. Then more pages of ravishing dresses, including a section called "Frankly Forty" for the mature woman. Just before the society section is Diana Vreeland's famous "Why Don't You--?" column encouraging us "for week-ends in the country..., wear black paillette slacks with a hand-pleated white handkerchief linen blouse, black lacquer Chanel bracelets on each wrist and a huge multicolored jeweled pin at the throat". Thanks, Diana. I'd love to.

And we're back to the perfume ads. Here's one for Elizabeth Arden Night and Day in a deco bottle. The ad is plumped with drawings of ostrich feathers. Lanvin encourages us to give its perfumes "for all occasions": My Sin, Scandal, Rumeur, Arpège, and Prétexte. (Has anyone tried Prétexte?) Here's an ad for Yardley Bond Street, packaged alone or with a powder compact, and here's one for Ciro Reflexions "The way to say 'remember me'". Another ad is a photograph of a majestic Coco Chanel leaning against the fireplace in her rue Cambon apartment with the famous coromandel screens in the background. A drawing of a mega-bottle of Chanel No. 5 sits below the photo, accompanied by this copy: "Madame Gabrielle Chanel is above all an artist in living. Her dresses, her perfume, are created with a faultless instinct for drama. Her Perfume No. 5 is like the soft music that underlies the playing of a love scene." The ad mentions a perfume called Glamour de Chanel, too.

So many ads! I have to break for another paragraph. For $27.50 you can have a bottle of Schiaparelli Shocking, "Every once in a decade comes a new perfume that attracts like a magnet". Bourjois Kobako shows a blond cozying up to a geisha, although the ad purports to show a perfume that is a secret from "the great families of China". Houbigant Présence insists that it "cannot be described" but must be lived with, and Lenthéric lays out a dozen perfumes, or "sonnets to loveliness" that you might want to buy. Molinard 1811 gives a little history: "At the prime of his career Napolean divorced Josephine. Poor Josephine...a weak sister to Maria Louisa. The modern Josephine need not suffer that scorned feeling...Molinard has just created a new exciting perfume called 1811." Hang on, just a few more: Le Clairac Kismaju invites you to "the slumberous mystery of ancient India"; Roget & Gallet Fugue claims to be "as Haunting as a Beautiful Melody", and Millot Crêpe de Chine promises the "Essence of Refinement". Finally, a quarter-page ad for Jean Patou shows a cubist drawing of a bottle of Colony.

I want a bottle of each of them. But really what I want is the December 1937 issue — it's supposed to have a perfume guide to help us choose a perfume that is "neither too bold nor too banal; neither too volatile nor too lingering". Maybe at that next yard sale I'll find it.