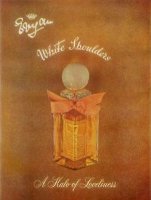 I’d be willing to bet White Shoulders was the first perfume many of you owned — or pilfered a drop or two from your mom’s dresser. From the fragrance’s tawny pink packaging with a gold cameo and font that looks like it was lifted from a Marquess’s personal letter, to its lush white floral scent, for me White Shoulders was the ne plus ultra of class.

And then I grew up. To be fair, White Shoulders changed a lot over the years, too. When it was first released in 1945, the Hartnell perfume company, later renamed Evyan Perfumes, manufactured it. Over the years, White Shoulders bounced from Evyan to Elizabeth Arden to Parfums International, and now to a company I’ve never heard of, Idea Fragrances Company. No doubt its formula changed and cheapened. Now for six dollars and a trip to Walmart, you can own a quarter ounce of White Shoulders Parfum.

Jan Moran’s Fabulous Fragrances lists White Shoulders’ notes as neroli, tuberose, aldehydes, gardenia, jasmine, orris, lily of the valley, rose, lilac, sandalwood, amber, musk, and oakmoss, and writes that its “predominant note is tuberose.” In other words, White Shoulders is a tuberose fragrance with every other white flower in the book shoveled in.

Initially, I was willing to go with that description, and after a few wearings I decided White Shoulders was a pretty, innocent fragrance without a lot of sex appeal or surprise, but nice nonetheless. Plus the bottle is so darned cute. Then I tried White Shoulders next to Frédéric Malle Carnal Flower. Compared to that heady tuberose heartbreaker, I realized White Shoulders has a lot of rose. In fact, after about fifteen minutes, I’d call it a rose rather than a tuberose fragrance. I could also smell how one-dimensional it was.

The good news is that the delicious pink of White Shoulders’ box and cap, and the cameo molded into the bottle remain the same. I may not wear the fragrance, but I’ll keep the box. If I ever have a boudoir, you can bet I’m painting it the exact same color.

Idea Fragrances Company White Shoulders can be found at drugstores.