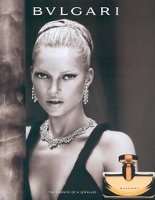 It was interesting to read the various opinions on Bvlgari as a fragrance house in the comments to Kevin's article about their Aqva line for men. I think of Bvlgari as one of the better mainstream brands. No, the fragrances aren't all wildly innovative, but to my nose, they're all (ok, mostly) so nicely done. A perfect example: Bvlgari Pour Femme.

Bvlgari launched Pour Femme in 1994. It was the line's second fragrance, following Eau Parfumee au Thé Vert, and it was originally known just as "Bvlgari". They introduced it slowly in the United States, restricting it initially to about 40 stores, and I can't resist quoting this oh-if-you-only-knew statement from a Chanel representative (a Chanel subsidiary was in charge of the US distribution):

We think that things are becoming a little too fast, easy and gimmicky in the fragrance business. Perhaps the best way to cut through the clutter is to be more quiet and tasteful about a launch. (via Women's Wear Daily, 6/17/1994)

We'll leave aside consideration of how well a "quiet and tasteful" launch would work in 2008, but do note that Bvlgari is still investing in Pour Femme today; in 2006, they relaunched it with Kate Moss as the new face.

The original fragrance was developed by perfumers Nathalie Lorson and Sophia Grojsman. The opening is citrusy but quiet about it, with touches of fruity sweetness and a hint of bitter green (notes: rosewood, ylang-ylang, orange blossom, bergamot, jasmine tea, violet, mimosa, rose, iris, vetiver and musk, possibly peach, raspberry, tuberose). The heart is a straight up floral; to my nose the rose and violet are most prominent, but you'll notice the jasmine and mimosa as well. In the early stages it is mildly powdery, but the longer it is on skin, the more powdery it gets, and I assume it is the powder that earns Bvlgari Pour Femme the dreaded "old lady" tag* in some of the MakeupAlley reviews. The base is middling warm and woody-musky.

Bvlgari Pour Femme isn't quite what I'd call sexy, but it has a little edge of something earthy and dark in the base that elevates it above plain old "pretty-feminine-romantic" (although it is all of those things too). It is sophisticated without being in the least aloof, and it's just plain nice. Like Michael by Michael Kors, it just doesn't suit me, but I like knowing it exists.

Bvlgari Pour Femme is available in Eau de Toilette, Eau de Parfum and Parfum. The Eau de Parfum is the only concentration I've tried (do comment if you've tried the others), and for that matter, I haven't tried it since they relaunched and repackaged it in 2006 so I don't know if it has been reformulated recently. The lighter concentrations can be found easily — and cheaply — at the online discounters. There is also a lighter Eau Fraiche version; I do not know if it is still in production, but it can be found online as well.

* Don't shoot the messenger! As someone who is rapidly (and proudly) approaching old-lady-ship, I do not much care to see the term applied pejoratively to fragrances, and there are battles on the fragrance board at MakeupAlley from time to time over the issue. I'd rather see the term "old fashioned" or "mature", but I wouldn't be at all surprised if I've used some equally contemptuous terminology when describing "young" scents.