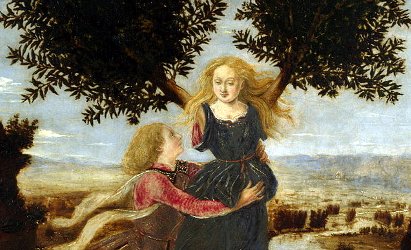 When DelRae asked me to work on her new fragrance, 'Wit', I was charmed and very interested. First, with such a fresh, bright, fun and clever name for the perfume. Secondly, a fragrance centered around Daphne, a beautiful flower never really explored before in fragrance, and finally the story of Daphne, a mythical character full of intrigue, imagination and love.

That's perfumer Yann Vasnier, talking about the latest from niche line Parfums DelRae. I was likewise charmed and very interested when I heard about Wit, not least because Parfums DelRae is not exactly prolific: they've done nine fragrances since they debuted in 2000. In comparison to some niche brands, that's not even a snail's pace.

But they've all been worth waiting for,1 and there aren't many brands that warrant such praise. Wit, the fourth Yann Vasnier fragrance for the brand, joined my buy list almost as soon as I had it on skin, and yes, it stayed on my list even after several wearings.

So, as Vasnier said, Wit is focused on daphne. If you've never smelled daphne, it's one of the prettiest of the spring flowers, but I've never smelled the variety they used for Wit, daphne cneorum2 (and even if I had, I'm sure I could not tell you if this was true to the flower, nor would I care all that much — it does smell reasonably daphne-ish to me). Here's DelRae Roth's description:

Daphne is one of the first flowers to bloom in early spring. Its delicious lemony, neroli scent is such a surprise and delight in the chill and gray of winter. Such a bright and spirited presense [sic]. I knew at some point I would devote a perfume in celebration of this very lovely bloom that signals Spring, love and happiness.

That's accurate, but it makes daphne sound perhaps less full-bodied than it is, and the first thing you might want to know about Wit is that it is, indeed, full-bodied. If you've become accustomed to the perfume industry's tendency to use the term "spring-like" to mean light, breezy-airy florals, Wit may be something of a surprise. It's closer to earlier florals from DelRae (like Amoureuse and Bois de Paradis, although it isn't really as strong as either) than to some of the lighter, more recent "skin scent" offerings (like Mythique and Panache).

Wit starts bright and green, with a lovely burst of lemon; it's also richly floral right off the bat, with spicy nuances and a fair amount of sweetness early on, only partially tempered by the leafy notes (the whole list: meyer lemon, green mandarin, angelica, laurel nobile, daphne cneorum, jasmine, narcissus, mimosa, ylang ylang, amber, vanilla and velvet musk). You will make out the jasmine and narcissus in particular as it dries down, and while both the lemon and the green linger for some time, it does get drier, spicier and more vanillic over the first couple hours. The base is pale ambery-musky-woods. It's not skanky, really, but it's not clean and fresh either: just like flowers, right?

Verdict: Wit is beautiful, and easily lives up the 'spring, love and happiness' billing — unless this turns out the be the most stellar perfume year ever, Wit is certain to make my 'best of' list for 2014. The last floral that made me swoon like this was Le Labo Lys 41, and like that one, Wit will probably linger for years, or forever, on my buy list without getting purchased (as has DelRae Panache, for that matter). World, we need more 15 ml travel sizes, for, say, $50 or less? But if I could have just one perfume released so far this year, Wit would be an easy pick.

Wit is conventionally feminine, but more so in the opening than the dry down. The lasting power is good. 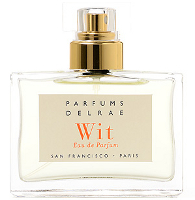 1. Which is not to say I love them all. And yes, I really didn't like Emotionelle, but I'd say that if you're a huge fan of melon perfumes, it's a must-smell.