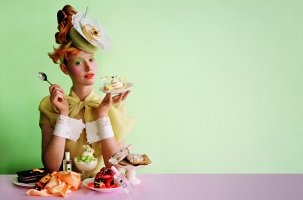 Jo Malone's new limited edition Sugar & Spice collection, inspired by "quintessential British pudding" flavors,1 has much in common with their last limited edition2 collection, 2011's Tea Fragrance Blends — this is a quintet of mostly sheer, food oriented (but not over-the-top gourmand) fragrances. They're relatively linear and relatively clean, and can be easily layered or worn alone.

I smelled all five on paper, and immediately dismissed four of them as not my thing. Lemon Tart and Ginger Biscuit were too pale and quiet to interest me at all — a quick spritz of Ginger Biscuit (I really wanted to like Ginger Biscuit) on skin was interesting for all of 2 minutes. If the two stores I visited were any indication, those two are also the biggest sellers of the collection, which shows how perfectly Jo Malone knows their customer base — "they're so clean and fresh", enthused the sales associate who helped me at one store. Redcurrant & Cream was more attractive than I expected, but ultimately not me; Elderflower & Gooseberry, I'm sorry to say, I've already forgotten.

So that leaves Bitter Orange & Chocolate, which to my nose had the most oomph (on paper, at least) of the five.3 And the opening blast is, to my nose, nearly perfect, assuming that the idea of Bitter Orange & Chocolate appeals to you at all — if it doesn't, I seriously doubt the perfume will change your mind. Anyway, it's a dark, just-slightly sweet cocoa powder with juicy orange accents, and for a few minutes after I put it on skin, I really thought I was going to have to buy it.

The dry down, unfortunately, is not quite so perfect as the opening. On one wearing, the cocoa powder slowly took on a faint synthetic edge (shades of tootsie roll instead of the sophisticated orange truffle rolled in cocoa powder it started out as). That didn't happen every time I wore it, but my bigger complaint is that it just doesn't smell vibrant enough after 20 minutes to tempt my money out of my wallet; mostly, the dry down just smelled ok: mildly creamy, mildly chocolate-y, a bit orange-y, not quite lively enough to enchant. It does better on clothing than on skin, but even on clothing, it did not make me swoon with delight once the top notes were gone. I probably should have tried layering it with something (the ginger biscuit? I'm still wanting the idea of the ginger biscuit) but since I knew I would never buy two of the set, I didn't bother. I will say that the lasting power, for a Jo Malone, is quite good.

Verdict: Like, but not love. It's certainly worth a try if the concept appeals to you.

Really good chocolate perfumes are ridiculously hard to find, considering that we have too many of nearly everything else. Aquolina Chocolovers is long since discontinued, and I don't know if they're still making the one time cult favorite Serendipitous by Serendipity 3 (also chocolate and orange). There are also a few possibilities among the offerings at Demeter, and I know there are others that aren't coming to mind: if you know of a good chocolate perfume, do comment!

Jo Malone Bitter Orange & Chocolate was developed by perfumer Christine Nagel, and is sold in 30 ml Cologne for $60. The notes include orange peel, cocoa, coconut and coumarin.

1. "Pudding" in many parts of the English speaking world simply means "dessert" and that is how it is used here. In the US, pudding more frequently refers to a milk- or egg-based custard.

2. The Jo Malone limited editions tend to reappear if they're sold well; at the moment, Earl Grey & Cucumber has reappeared from the 2011 Tea set. My local Nordstrom also had all of the Intense Cologne collection.

3. Bitter Orange & Chocolate also appears to be the most reviewed on perfume blogs; at least one not-perfume blog complains that it's too overwhelmingly strong. Perspective is everything.