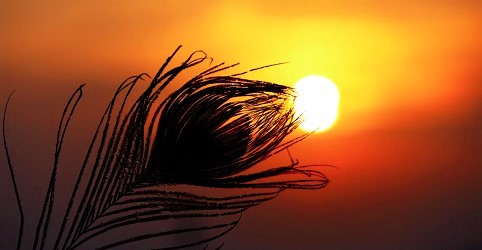 While growing up in the hot and steamy South, I loved autumn and its coolness, and you'd think that after Seattle's oven-like temperatures and dangerously smoky skies this summer, I'd be looking forward to autumn. Wrong. I'm already counting the weeks till spring and wishing I could move to Buenos Aires for the next six months and enjoy spring and summer all over again. Perhaps I've changed (emotionally?) but fall feels sad this year; I reckon it'll be dark, sodden, the beginning of The End — the interminable winter months. 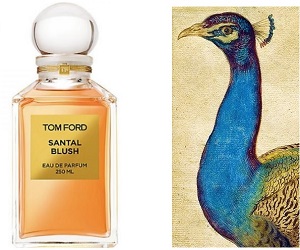 During fall and winter I'll be giving gallery talks on Seattle Art Museum's exhibit Peacock in the Desert: The Royal Arts of Jodhpur. I'll not try to compete with the glorious fashion/textiles in the show (nor wear jodhpurs), but I'll adorn myself with scent from my tiny bottle of Mysore sandalwood oil and Tom Ford Santal Blush (a happy sandalwood perfume). I hope the spirits of the show will appreciate both fragrances and feel more "at home" in damp Seattle.

Let's go from the Indian Thar Desert to the tropics with Astier de Villatte's Honolulu candle, full of the scents of salty air, lemon and dense/sweet flowers (gardenia). Honolulu is not a "dumb" white floral; it has some "brains" (think Doris Duke and her fanciful Honolulu home Shangri La, now a museum of Islamic art and design).

In cool weather I drink tea quite often, and usually it's a gourmand tea (sorry, Robin Here at NST and all tea purists and connoisseurs!) Two of my favorite black-tea blends are from Mariage Frères: Hallelujah (citrus, fruits and vanilla) and Coup de Soleil (wild strawberry and caramel). Each blend is delicious and makes an aromatic pot of tea. The flavors are so rich and the tea fumes so sweet, no sugar is necessary. 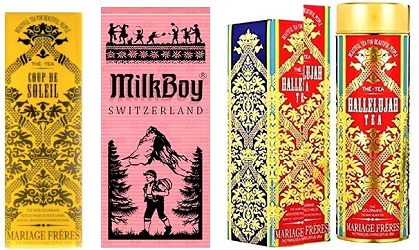 After your cuppa, if  you hanker for something sweet to eat, try a chocolate bar from MilkBoy; its Swiss chocolate tastes great. I enjoy their 60% Cocoa Bar with Essential Pine Tree Oil (not as weird as it sounds) and the White Chocolate Bar with Blue Potato Chips and Sea Salt (pretty to look at, too). 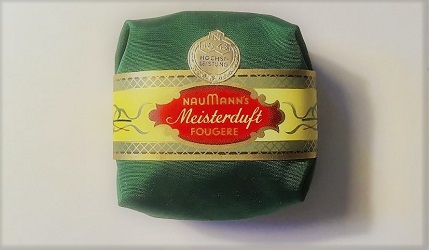 Every top 10 list must have a rarity, correct? Mine is a soap that's no longer produced: NauMann's Fougère (each bar was individually wrapped in silk). While chatting with Fumerie Parfumerie co-owner Tracy Tsefalas this summer, we discovered we both loved this soap...and she had some bars at home! She mailed me a bar (how generous is that?) and it's as heavenly as I remember it: a hay-scented fougère that smells like high summer in the country. (NauMann made sensational soaps; why in the world did the company go out of business?) 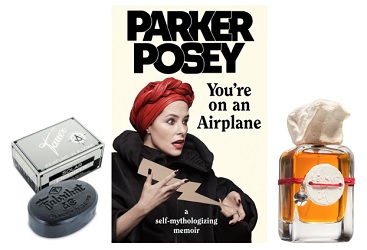 I needed a good laugh last week and tackled the (unscented) new book by one of my favorite actresses, Parker Posey — You're on an Airplane: A Self-Mythologizing Memoir. I don't believe Posey mentioned perfume one time in the book but she's a lover of dogs, pottery, yoga, dancing (and mentions a cute dance teacher who had body odor...which she thought made him cool). Oh, there's also some vintage/homey recipes that point to a love of sweets; maple syrup came up in a hilarious restaurant episode. I decided Posey would like Mendittorosa Le Mat, with its honeyed, but interesting, aromas of immortelle (maple!), rose and silky geranium leaf. (I think she'd like the adorned bottle too...complete with jingle bell she could attach to her dog Gracie's leash.) In honor of Posey's role as Dr. Smith on Netflix's Lost in Space, I'll also recommend Tauer Solar Engineer soap...full of Nootka cypress oil (Nootka cypress grows in the forests of British Columbia where Lost in Space is filmed.) Nootka smells of motor oil, purifying natural medicinal soaps (always black!), as well as the forest; it's an acquired scent that I love.

OK. This recommendation may appear crazy to some of you, but I use cosmetics on one of my cats. There! The krazy kat's out of the bag! Uncle Vanya Mandelstam ("BonBon" or "Bonnie" to his familiars) suffers from dry, dandruff-y skin and gets so miffed at his ruff he starts pulling out hair while giving me a side-eye. I bought Dermascent's Essential 6® Spot-on treatment for him... and it smells fantastic, with its natural oils of  clove, camphor, gaultheria, rosemary, curcuma, oregano, lavender, peppermint, tea tree, cedar, hemp and neem (plus fatty acids and vitamin E). Uncle Vanya smells terrific. And his coat is so thick, glossy and dandruff-free I'm tempted to put a vial of Dermascent between my shoulder blades once a week, too. (This product can also be used on dogs and rabbits.)

Ex Nihilo Vetiver Moloko Eau de Parfum smells like sumptuous vetiver cold cream; I find it addictive and I'll be reviewing it later this month (along with some of the other fragrances mentioned in this post). Another perfume (that brings to mind harvest time) is Nishane Karagoz, a powerful masculine fragrance full of syrupy pineapple and grape aromas with a dash of "sweaty" vetiver.

In autumn, one thing's for certain — people start getting sick: colds and flu on the horizon. Czech & Speake No. 88 (with its geranium leaf, bergamot, rose, frangipani and cassis) smells like an expensive throat lozenge from the Edwardian period. I'd happily roll one (or two...or three) of these lozenges around my mouth. As I wore No. 88 I visualized Charlotte Rampling in period garb, as my no-nonsense majordomo, dispensing the lozenges as I complained about autumn from my heavily cushioned settee. If only!

Happy (sad!) Autumn to you all!

Note: top images are Peacock Feather and Peacock [cropped] by Nicolaus Juvenel via Wikimedia Commons. Images of Uncle Vanya by the author.