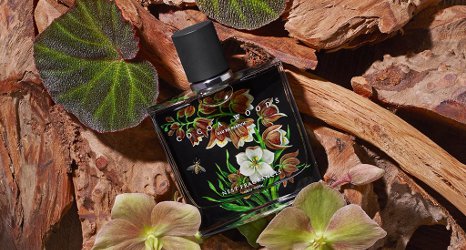 Reading the press announcement for Nest Cocoa Woods, I had one of those "time flies" moments. Cocoa Woods has been released to coincide with founder Laura Slatkin's 25 year-anniversary in the fragrance industry and the 10-year anniversary of the Nest fragrance line. Yes indeed: Slatkin and her husband Harry launched Slatkin & Co. home fragrances in the early 90s, and Nest's candles and other home and body items made their debut in 2008. I just can't believe it's been that long!

Nest's "fine fragrance" collection started up in 2012 and currently includes twelve scents, by my count. Cocoa Woods, the newest addition, is described as a "woody-gourmand scent" with notes of cocoa, sequoia wood, white sandalwood, tiaré blossom and ginger. Like the rest of the line, it has a beautiful bottle with decoration inspired by eighteenth-century floral illustration and découpage. And it's really the packaging that keeps me coming back to this line, because I'm still looking for a Nest fragrance to love.

Would Cocoa Woods be "the one"? I tried it out in Sephora, and on the blotter it seemed completely charming, a sophisticated comfort scent of powdery chocolate and creamy-smooth sandalwood. I was briefly tempted to impulse-buy a rollerball, but I resisted (small victories!) and instead requested a sample to take home.

My experience of Cocoa Woods on skin was different, and weirdly unpredictable. One day, it was such a blunt assault of synthetic woods that I had to fight the urge to scrub it off. It seemed strangely masculine for a relatively mainstream fragrance line aimed at female consumers, and I started thinking that it had to be a cynical mash-up of Angel's gourmand heritage and Le Labo Santal 33's woody hipster cool.

Maybe I was just especially hot and cranky that day, because I didn't dislike Cocoa Woods quite so much the second time around. It still felt harsh for the first hour or so — the chocolate note seemed overly bitter, and there was something ozonic in the initial application that stings my nose. After a while, though, the cocoa settled down against its woody background. I think I detected the white floral note here and there — it felt oddly beach-y against the cocoa — and the dry down turned musky as well as woody. Despite its claim to be "empowering" and "fearless," however, Cocoa Woods just ended up smelling too thin and flat for me. Despite its beautifully designed and executed bottle, it felt like a slightly elevated Bath & Body Works fragrance blend.

Of course, I realize that I'm not the target audience here; the reviews on the Sephora positive website have been mostly positive so far, with praise from customers who are tired of mainstream floral perfumes. I can see how Cocoa Woods might feel like something new and different to shoppers who are tired of Marc Jacobs flankers and their pink-tinted ilk, and I hope they'll continue exploring. 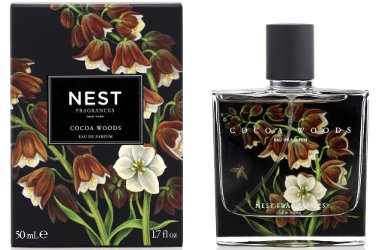 As for me, I still love Nest's Blue Garden candle, and I'll continue to gift friends and family with the brand's candles, hand washes and lotions (please bring back the Orange Blossom collection, Nest!). But for now, at least, my "perfume cabinet" will remain Nest-less.