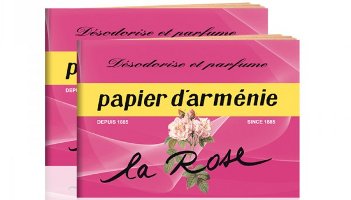 Back in 2006, Kevin wrote a detailed post about Papier d'Arménie, the traditional French incense papers soaked in an alcohol-based mixture of benzoin and other aromatics. At the time, he sent me some to try, and I've since purchased more. I've continued to use them from time to time as an easy (and cheap) way to scent my home — all you do is rip a small sheet out of the package, fold it like an accordian, and light it.1 I like the scent best from a room or so away (as Kevin pointed out, it can smell a bit harsh from close up), and I like it even better unburned; a few loose papers will nicely scent a drawer.

Later, I got my hands on some of the La Rose papers (see above) that perfumer Francis Kurkdjian developed for the Papier d'Arménie brand in 2009.2 These smell just fabulous unlit: sweeter, creamier, more floral and less harsh than the original. Burned, I do like them a little better than the originals, but the rose is much clearer in the unlit paper. And again, they work nicely as sachets. 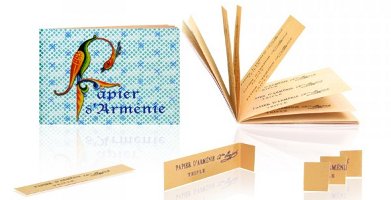 But the reason for today's post is a more recent discovery, although it was released earlier: the Francis Kurkdjian version of Papier d'Arménie developed for the "Year of Armenia in France" in 2006 (see just above; blue cover). This is the perfect Papier d'Arménie. It is even creamier and sweeter than La Rose — the powdery myrrh, incense, benzoin and vanilla scent of the unlit paper would be wonderful in a personal fragrance (or dusting powder) and would make a nice follow up to Guerlain's Bois d'Armenie. A just-opened booklet sitting on my desk perfumed my office for days; in a perfect world, I'd have a fresh one delivered every week. As with the others, I like it better unlit than burned, but even burned, it retains some of the creamy deliciousness of the paper. I've burned one nearly every day since I got my precious few booklets, and I've put individual papers in several of my dresser drawers. I also stuck one in the top drawer of my night table so that for a few days, it was the last thing I smelled as I drifted off to sleep. Next, I may try one slipped inside my pillowcase to see if the scent lasts longer that way.

Papier d'Arménie now also makes candles in all three fragrances, although so far, the only one of the three that seems to be available in the US is the original scent ($48 at Beautyhabit). One of these days, I'll bite the bullet and have one of the Armenia Year candles shipped from France.

1. I usually twist one end and jam the paper in a stick incense burner, but you can just light it and set it in a dish, or you can buy one of the lovely terracotta burners from Beautyhabit.

2. Maybe Kevin sent me those too? Somebody did, so thank you to whomever it was. Also note that Francis Kurkdjian has since developed a series of incense papers for his own Maison de Francis Kurkdjian brand. They come in three fragrances: Lumière Noire, APOM and Aqua Universalis, but they're much more expensive at $25 per booklet (at Luckyscent). I have not tried them, if you have, do comment!