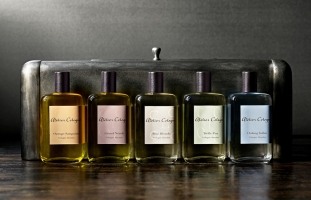 Atelier Cologne, a new niche perfume house based in Paris and New York, recently introduced its range of five fragrances. Atelier's signature concept is the “cologne absolue": fragrances inspired by the historic recipe of the original "Eau de Cologne" — a mixture of citrus and herbal ingredients — but blended in stronger concentrations for a richer and more lasting effect. Each of the fragrances in Atelier's debut collection is centered around a citrus motif, and each is intended to embody a "singular moment" of memory and experience.

My current favorite from Atelier is Grand Néroli, created by perfumer Cécile Krakower. Grand Néroli opens with a radiant burst of neroli and orange blossom (those two lovely, but differently-achieved, products of the same flower). This opening accord is soon pierced by more astringent notes of lemon and petitgrain, for a lively blend that mellows after an hour or so. Grand Néroli's middle phase includes a salty aspect with a very subtle “beachy” feeling, but it never becomes as marine-like as Le Labo Neroli 36. The galbanum seems to extend the citrus notes without turning them too green, and the vanilla and amber are detectable only as a gentle warmth in the base; this is definitely not a gourmand scent. Grand Néroli ends up feeling almost like a "skin scent" for me, if the skin in question were sun-warmed and healthy. It’s the most “feminine” Atelier fragrance, and the company's description alludes to the wedding symbolism of its orange blossom. However, it could also be worn by a man, especially once the initial floral note dissolves.

The promotional text for Orange Sanguine evokes a breakfast gathering on a sunlit terrace overlooking the Mediterranean, and this fragrance is certainly the “brightest” of the five. It was created by perfumer Ralf Schwieger (who won my heart years ago by composing Lipstick Rose for Editions de Parfums Frédéric Malle), and it’s an uncannily accurate representation of a blood orange: if you closed your eyes and someone waved an Orange Sanguine-permeated blotter in front of you, you’d easily believe that you were smelling an actual piece of fruit. Orange Sanguine’s composition captures the blood orange's sweet pulp, slightly bitter pith, and zesty rind all at once. It turns smoother and very slightly creamy after an hour or so, perhaps due to its notes of jasmine and tonka bean.  However, the lasting finish is still orange-y, a bit more subdued than the opening, with a hint of green tartness. Orange Sanguine is more vivid than orange scents like L'Occitane Ruban d'Orange or L’Artisan Parfumeur Mandarine Tout Simplement, for example, and it doesn’t have any intrusive woody or spicy notes to distract from its fruity “hologram” effect (as Perfumes: The Guide would say).

The Atelier Cologne line was produced in collaboration with Mane and Robertet, two suppliers known for their focus on natural materials, and the scents do give the impression of utilizing a high percentage of natural ingredients. A fine attention to detail runs throughout the brand’s presentation, from the hand-applied leather caps and the removable atomizer attachments to the beautifully arranged and photographed still-life vignettes for each scent (credited to set designer Nathalie Cassegrain and photographer David Meredith). It’s not an inexpensive line, but the bottles are large, and the fragrances have above-average staying power for citrus scents. I've just started making the transition to lighter clothing (and fragrances) for spring, and Grand Néroli seems appropriate for this change, while Orange Sanguine feels like a preview of summer.