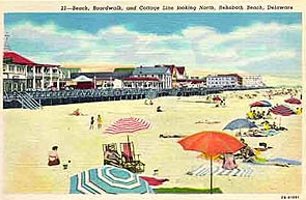 Bobbi Brown launched her Beach fragrance in 2002, and it has been a best seller for the brand since then. The notes include summery sand, jasmine, sea spray, dianthus dune flower, neroli petals and driftwood.

Bobbi Brown Beach isn't a tropical sort of beach fragrance, like J Lo's Miami Glow or Matthew Williamson's eponymous scent; it smells like an Atlantic beach vacation (East Coast of the US, to be more exact): a bit of fresh sea air, a bit of salt water, and the very synthetic smell of sunscreen. The opening is a wee bit sharp, and rather reminiscent of some of the sunscreen sprays that have suddenly become popular at my own local pool this summer, but it settles nicely. I have seen the smell compared to Coppertone, and it does have something rather Coppertone-ish about it, but it isn't the dead ringer for Coppertone that is At The Beach 1966 (see below).

I have said before that I'm not a huge fan of beach fragrances. I do like Comptoir Sud Pacifique's Aqua Motu for the simple reason that it reminds me of the beach in California where I used to live, but I don't generally love ozonic or marine notes, and I'm not dying to smell like suntan lotion. That said, if you do want to smell like suntan lotion, Beach is a good choice: it isn't overly heavy or sweet, and it does have something very cheerful and summer vacation-like about it. It doesn't last long, but then, neither do summer vacations.

At the Beach 1966 is a 2005 launch from CB I Hate Perfume, and was the first fragrance in the Secret History line. The scent features notes of Coppertone (the circa 1960s version), North Atlantic salt water, wet sand, seashells, and driftwood.

Even more than Bobbi Brown's Beach, At The Beach 1966 is an exercise in nostalgia. I should start right off by admitting that I don't have the kind of olfactory memory that would allow me to determine if the rendition of Coppertone circa 1966 is accurate, but it certainly is immediately recognizeable as Coppertone, and this version of a summer beach is appropriately soft and hazy and filtered by memory: it has less of the overtly synthetic edge that makes up Bobbi Brown Beach, and more of the rest of the beach — the sand, the water, the boardwalk.

It is, simply put, a great scent, and very much worth trying. I have a feeling that I will reach for it frequently this coming winter. All the same, I must confess that I like CB I Hate Perfume's Mr. Hulot's Holiday a bit more. Call me crazy, but I'll take a stroll along a beach in the south of France over a stroll along the Jersey coast any day.

And now, appropriately, I am off for the beach. Next week, Angela will be doing a week-long series on building a fragrance wardrobe.

Note: postcard of the beach at Rehoboth, Delaware via rehoboth.com.