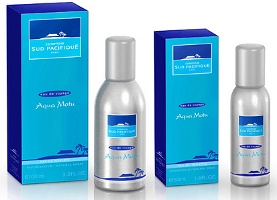 In honor of my recent return from what was probably my last beach vacation of the summer, today I am wearing Aqua Motu by Comptoir Sud Pacifique. Aqua Motu was originally released under the name Motu in 1992, and I believe the fragrance was reformulated when it was renamed. The notes for the current version are helychrisum, marine notes, lily of the valley, warm sand, and kelp.

I have never been a big fan of marine fragrances, but I adore Aqua Motu. It smells absolutely nothing like the mid-Atlantic beach where I now spend my summer vacations, and truth be told, it probably doesn't really smell like an actual beach anywhere. All the same, in a way that I can't exactly explain, it is an almost perfect, filtered-by-memory olfactory snapshot of the beach in La Jolla where I used to live.

Aqua Motu starts with a blast of ozone, and after that it smells pretty much like a synthetic version of a beach: sea air, salt water, some kelp, and the gnarled little shrubs that grow along the coastline in Southern California. It is a mild fragrance, lightly sweet, and pretty much linear once it settles. What is happily missing is the tourists: there is no suntan oil that I can detect, and no tropical drinks. Just the beach.

I would be hard pressed to defend Aqua Motu against the charge that there are better marine fragrances out there. There probably are. But I have yet to find one that smells so much like the particular beach in my memory. Wearing it is an exercise in nostalgia for me. It is just as well that it is not particularly long lasting, as a little nostalgia goes a long way.

Aqua Motu is an Eau de Toilette. For shopping information, see the listing for Comptoir Sud Pacifique under Perfume Houses.