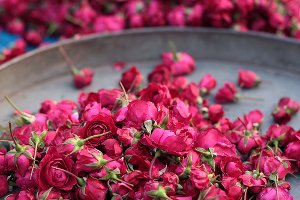 Last month I tried all three fragrances from Neela Vermeire Créations in one sitting, one after the other. Trayee made me think, and Bombay Bling made me smile, but Mohur made me swoon a bit. Kevin has already written an excellent review of Trayee and Bombay Bling, in which he mentioned that Mohur wasn't quite his type; however, it is exactly my type, so I'm happy to follow up with a review of this fragrance, which is described as "a combination of opulent moghul rose perfumes and a distinguished spicy leather bouquet."

My knowledge of Indian history is woefully limited, and my impressions of the British Raj period have been gathered mainly from Merchant-Ivory productions, but the idea of a rose-based fragrance combining western and eastern influences appealed instantly to me. Having tried Mohur, I can now imagine it being worn by either a Mughal Empress or the elegantly gowned wife of a British Viceroy. I'll start by describing it as a spicy-gourmand-incensey rose, which gives you an idea of its various aspects.

Mohur opens with a greeting of warm cardamom, delicate saffron, and buoyant black pepper. However, its spicy side is soon balanced by a sweeter heart. The creamy almond and powdery aubepin (hawthorn) flower notes mix with a bright pink rose in a way that reminds of me of certain Indian desserts I can never resist, like gulab jamun or rose-flavored falooda. Yes, there's oudh in the composition, but it's a very sheer oudh that brings out the spice of the other notes, rather than smothering them in its sweaty embrace (as most oudh fragrances do on my skin). The vanilla and amber stay in the distant background, but the sandalwood makes an appearance in the dry-down, with a hint of leather that laces the base notes together.

Overall, Mohur is complex but not heavy, and it has kept me intrigued over numerous wearings. It's not quite like any other fragrance in my collection, which does include assorted spiced roses and sweet roses. It's obviously more Eastern-influenced than something like Les Parfums de Rosine Secrets de Rose (a recent favorite of mine). It would probably appeal to fragrance-wearers who enjoy saffron-and-rose compositions such as L'Artisan Parfumeur Safran Troublant, The People of the Labyrinths Amaze, or Miller et Bertaux Shanti Shanti, although it has more rose than Safran Troublant and less cumin than the other two, and it feels slightly more "feminine" than any of them. (It's probably the most feminine scent in the line so far, although it could still be worn by a man with unconventional tastes.)

Over my days of testing this fragrance, Mohur has never seemed exactly the same twice. One afternoon, it hovered around me like a shimmery cloud of gold dust and rose petals, and lasted so long that I could still smell it on my arms after a full night's sleep. Another time, it seemed to fit itself snugly to my skin in a much more subtle, spiced-wood way. I'm not sure what caused the difference, and it doesn't really matter. For me, Mohur feels like an intricate story that stays interesting with each re-telling, and it keeps me coming back for more.

Neela Vermeire Créations Mohur was developed by perfumer Bertrand Duchaufour. It is available as 55 ml Eau de Parfum ($250) through Luckyscent. It can also be purchased through the Neela Vermeire website, in a discovery set of the line's three fragrances (€75 for three 10 ml bottles).

Note: top image is Gulab by Meanest Indian via flickr; some rights reserved.